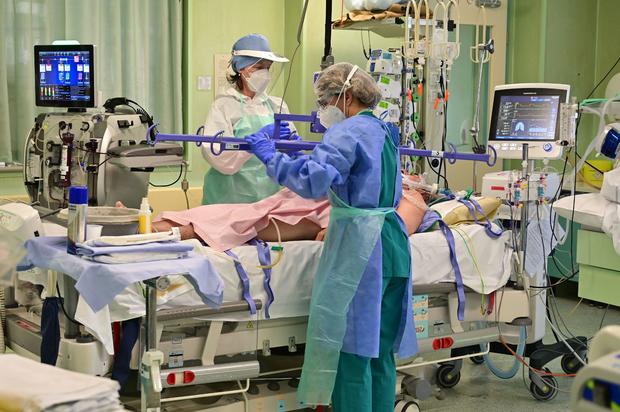 Rome — A year after COVID-19 struck Italy, more than half of the country’s residents were set to be placed back under hard lockdown restrictions from Monday, March 15 at least through Easter. Restrictions are being tightened in response to yet another rise in case numbers — Italy is entering a third wave of coronavirus infections.

Speaking at a vaccination center near Rome’s Fiumicino airport, Prime Minister Mario Draghi said the “measures are necessary to avoid a deterioration that would make even more stringent measures inevitable.”

He promised they would be accompanied, however, by financial support for families and businesses, “as well as the acceleration of the vaccine program, which alone gives hope of an exit from the pandemic.”

Italy was the first country in the world to implement a nationwide lockdown last winter, when it was the nation at the epicenter of the pandemic. Since then, the disease has been blamed for the deaths of more than 100,000 people in the country, but only weeks ago the country appeared to be bouncing back, albeit cautiously .

The national vaccination rate is low: Only 8% of Italians have had at least a first shot, compared to roughly 19% in the U.S.

Italians are growing tired and frustrated with the delay. The country’s inoculation campaign began in late December, but like other European nations it has suffered delays in the distribution process.

This week the country banned the use of one specific batch of the Oxford/AstraZeneca vaccine after reports of several people in Sicily dying shortly after receiving it. There has been no evidence that the vaccine caused their deaths, however.

Concerns over blood clots in people who’ve had the widely-used AstraZeneca shot have prompted similar pauses to its use in a handful of other countries, but both European officials and the vaccine’s makers insist there is no evidence of a link between the vaccine and blood clotting.