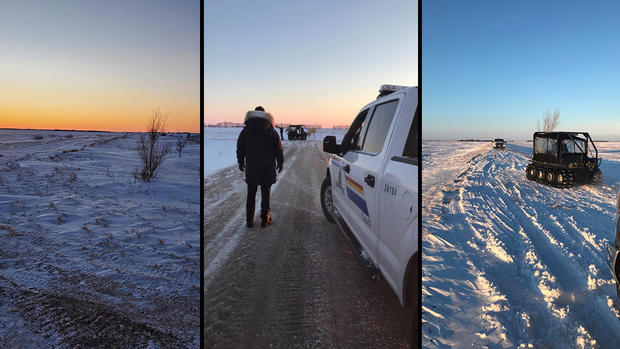 A Florida man was charged Thursday with human smuggling after the bodies of four people, including a baby and a teenager, were found in Canada near the U.S. border in what authorities believe was a failed crossing attempt during a freezing blizzard.

The bodies were found Wednesday in the province of Manitoba about 40 feet from the U.S. border near the community of Emerson. The office said the dead were a family of four Indian nationals who were separated from others in a group crossing the border.

The Royal Canadian Mounted Police said it’s believed they died from exposure while trying to cross into the U.S.

“It is an absolute and heartbreaking tragedy,” RCMP Assistant Commissioner Jane MacLatchy said.

Minnesota was under a wind chill advisory Tuesday night in to Wednesday, CBS Minnesota reported. During that time, feels-like temperatures in northern Minnesota were as cold as 29 degrees below zero.

MacLatchy said U.S. authorities had notified RCMP on Wednesday about a different group of people who had been apprehended after crossing into the U.S. near the town of Emerson, Manitoba. The group had items for an infant but no baby was with them.

That led authorities to believe others may have been missing and the RCMP immediately began a search in Canada. MacLatchy said the search covered difficult terrain with deep and drifting snow. Officers used all-terrain vehicles to get around because it was “virtually impassable.”

Officers located three bodies together – a man, a woman and a baby – about 10 yards from the border. The search continued and a teen boy was found a short distance away.

“These victims faced not only the cold weather but also endless fields, large snowdrifts and complete darkness,” she said.

MacLatchy said others are often involved in arranging to bring people across the border, which is criminal and extremely dangerous. In the past, it has been more common to see crossings north from the U.S. into Canada, she added.

That December, two men lost their fingers to severe frostbite after getting caught in a blizzard while walking from the U.S. into Manitoba. A few months later, a woman died of hypothermia near the border on the American side.

In 2019, a pregnant woman who walked across the border was rescued after she became trapped in a snowbank and went into labor.

Dave Carlson, the reeve of Emerson-Franklin, said instances of people crossing the border outside the checkpoint have dropped significantly in recent years. He was surprised to learn of the four deaths.

“If you look at the political climate on both sides of the border, it’s just mind-boggling to me that anyone had that sense of desperation to try and cross in extreme conditions,” he said.

It has been extremely cold and windy in recent days, Carlson said. The area where the bodies were found is far enough away that people would not see lights from the town, he said, and it would be easy to get disoriented.

The RCMP said it is working with U.S. Customs and Border Protection and the U.S. Department of Homeland Security.

Deputy Patrick Klegstad with the Kittson County Sheriff’s Office in Minnesota said his department is supporting the American side of the investigation. Its officers patrol the “desolate” open fields near the border every day, he said.

“Why they picked that spot to travel would be the million-dollar question,” he said.

The weather this week was so cold that it “takes your breath away,” Klegstad said. There are no trees or shelter near the border, only quiet and inaccessible farm roads.

Klegstad, echoing Canadian officials, said it’s uncommon to have people make the harrowing journey from Canada into the U.S. “It’s not very often we do have southbounders.”

Mounties warned that people should not attempt to cross the border outside a checkpoint, in either direction, because it can be deadly.

“I am saddened there was loss of life and the fact a small child died makes it even more difficult,” said Grand Forks Sector Chief Patrol Agent Anthony S. Good, in a statement. “Our hearts go out to the families and loved ones. I am also incredibly proud of the Border Patrol Agents and our [Royal Canadian Mounted Police] partners who selflessly endured sub-zero temperatures for hours to search for the missing persons. Their dedication to duty and courage is commendable.”