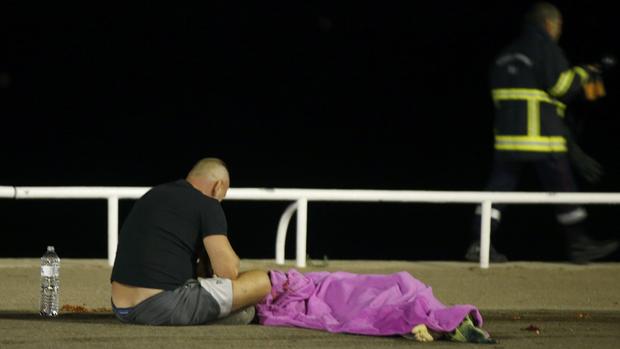 Paris — It was July 14, 2016 — Bastille Day in France. Some 30,000 people were on the seafront Promenade des Anglais in Nice that night to watch the traditional fireworks to mark the national holiday.

The road along the French Riviera promenade was closed to traffic for the evening. Suddenly, a truck appeared on the road and started plowing through the crowd, driving at 56 miles per hour. The driver swerved several times, deliberately, to hit a maximum number of pedestrians as people fled in terror.

The truck mounted the sidewalk at several points to avoid police roadblocks that had been designed to keep vehicles away during the festivities.

Police tried to stop the truck, but it traveled 1.5 miles along the Riviera seafront before they finally managed to halt it. The driver was shot dead at the scene.

In all, 86 people were killed, including 10 children and teenagers. Another 300 were injured. Among the victims, children who had been allowed to stay up late to watch the fireworks; foreign students enjoying a summer in France; and local families decimated as the truck tore through the crowds.

UC Berkeley student Nick Leslie, 21, was on a study abroad program in Nice for the summer. With several of his friends from the program, he’d gone to watch the Bastille Day fireworks on the Promenade des Anglais. As the truck plowed through the crowd, the students were separated from each other.

His friends put “missing” posters on lampposts, hoping he would turn up, but three days later, forensics doctors confirmed that Nick was among the dead.

Sean Copeland, 51, and his 11-year-old son Brodie, tourists from Texas, were also killed.

The next day the promenade was closed as police worked to piece together what had occurred. All along the road were the unmistakable signs that something terrible had happened: Dropped champagne glasses, heavy bloodstains, one high-heeled shoe missing its pair, and its owner.

ISIS claimed the truck driver was responding to its calls to target nationals of countries fighting against its self-declared “caliphate” in Syria and Iraq, but no clear link between the group and the attacker was ever established.

The attack took place just eight months after the deadly series of attacks in Paris in November 2015, and the country was still on edge. French counterterrorism investigators said they had foiled a number of planned terror attacks in 2015 and early 2016. A separate investigation is still underway into the security arrangements in Nice that night, to determine whether more should have been done to protect people.

Bouhlel lived in Nice, as did several of the accused. The eight suspects are on trial on a range of charges, including weapons charges, criminal association in a terrorist enterprise, and helping Bouhlel to hire the truck he used. The charges carry sentences of up to life in prison.

The trial is taking place in the central Paris courtroom that was built specifically for the November 2015 attacks case, which finished earlier this year. There are 850 civil participants in this case, including survivors and families of the victims. Most are from Nice. Some will travel to Paris for at least part of the trial, others will be able to follow the proceedings from Nice, where a special annex has been set up to show a live broadcast from the Paris court. The rest of the world will not see the proceedings, as French law prohibits news cameras in courts.

Jean-Claude Hubler is president of the association “Life for Nice.” He was on the beach that night when he heard the commotion. He said he knew it was an attack, and went to help.

“I held a woman’s hand until she passed,” he recounted. “That’s hard, and afterwards, I had to cover her. Near me, there was a father who was cleaning up the body of his daughter who had died. Farther down, there was a woman, a nurse, who was applying a tourniquet on someone who was bleeding. It was one thing after another. We had to cover the bodies — a beach worker gave us beach blankets to cover them.”

Like many from Nice, he understands that Bouhlel had to be stopped that night, but part of him wishes he could have survived, to stand trial.

“It would have been better for him to be present and take responsibility for what he did,” Hubler told the Reuters news agency. “It’s hard, but whatever happens, we trust the legal system.”

The trial will last 15 weeks. A verdict is expected on December 16.