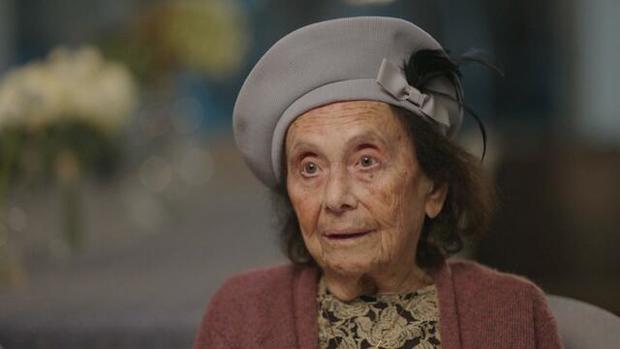 At 98, Lily Ebert might just be the oldest influencer on TikTok.

She has more than 1.6 million followers and over 23 million likes — largely for posts about how she survived the Holocaust.

“I was really not sure that I would stay alive. It is a miracle that I am here. But I promised myself, however long I will be alive, and whatever I will do in life, one thing is sure, I will tell my story,” Ebert said.

When Ebert arrived at Auschwitz, at the age of 20, guards took away her mother, her brother and one of her sisters.

“What really happened in our darkest moment, we wouldn’t think of that,” Ebert told D’Agata. “It was not in our mind that something like that can happen.”

They were taken away to the gas chambers that very afternoon.

Sharing her story with a TikTok audience was a mission Ebert and her 18-year-old great-grandson, Dov Forman, started during the 2020 pandemic lockdowns.

“I said to my great-grandmother, ‘If they can go viral for dancing, why can’t we go viral for sharing these really important messages?'” Forman said.

If you thought that the horrors of the Holocaust might be too heavy for a platform better known for cute kittens, stupid stunts and dance-offs, you’d be wrong.

With tens of millions of views, people wanted to know more about Lily Ebert and her survival story.

A video of Ebert showing her identification number tattoo got more than 20 million views.

One storyline in particular had followers intrigued — after Auschwitz was liberated, Ebert got to talking with an American GI who wrote a message on a German banknote.

“He wrote me, ‘Good life, good luck for your future,'” Lily said.

“I remember joking with my great-grandmother that I would be able to find the soldier in 24 hours,” he said.

It took less than that.

“I posted it, and within eight hours I had, I think, 8,000 notifications and the tweets had 2 million views. And an hour later we had managed to find the soldier,” Forman said.

His name was Private Hyman Shulman, from Brooklyn. He passed away in 2013, but they set up a Zoom call with his son, Jason.

“Quite honestly, that I thought at first that this was a scam of some sort, and yet when I looked at the banknote there, it said something like ‘good luck and happiness’ and there in Hebrew lettering was my father’s Hebrew name, first and middle name,” Jason Shulman said. “After I got over my distrust and realized something real was going on, it really did give me the chills.”

Ebert said that little note restored her faith in humanity.

Ebert and Forman, who live in London, have authored a book called “Lily’s Promise,” with a foreword by Prince Charles. They’ve even met U.K. Prime Minister Boris Johnson at Downing Street.

In reaching out to the TikTok generation, Ebert has kept her promise alive.

“I thought single-handedly, I will tell my story and I will change the world,” Ebert said. One TikTok at a time.

Lily Ebert’s story is part of the CBS special “Undeniable: A Truth to Remember,” streaming at 9 p.m. ET Tuesday, Feb. 1, on the CBS News app; download the app here.