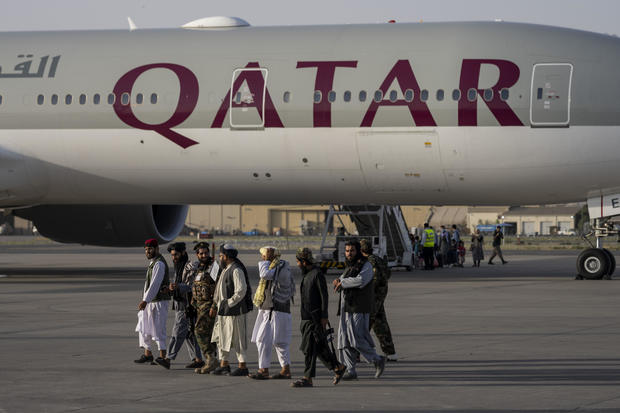 Evacuations continued in Afghanistan on Friday with an additional 21 U.S. citizens and 11 Lawful Permanent Residents fleeing Taliban rule, Secretary of State Antony Blinken said in a statement. This comes a day after the Taliban allowed a flight carrying Americans and other foreign nationals to depart the country for the first time since U.S. forces withdrew last month.

Two U.S. citizens and the 11 legal residents took an “overland route” out of the country. “We provided guidance to them, worked to facilitate their safe passage, and Embassy officials greeted them once they had crossed the border,” Blinken said late Friday.

It was not clear which border they traveled to.

Meanwhile, another Qatar Airways charter flight took off from Kabul on Friday with 19 U.S. citizens onboard.

“While we offered seats to 44 U.S. citizens, not all of them chose to travel,” Blinken said. “We are deeply grateful to the continued efforts of Qatar in facilitating limited operations at Kabul International Airport and helping to ensure the safety of these flights.”

“We continue to make good on our pledge to U.S. citizens, LPRs, and Afghans to whom we have a special commitment,” Blinken said. “We will be relentless in helping them depart Afghanistan if they choose to do so.”

The State Department did not say how many Americans remain in Afghanistan. On Tuesday, Blinken estimated there were around 100 Americans still in the country who wanted to leave, adding that U.S. officials were in contact with all of them.

Friday’s evacuations came one day after the Taliban allowed a flight carrying about 200 Americans and other foreign nationals to fly out of Kabul, U.S. and Qatari officials said on Thursday. The Qatar Airways flight, with about 20 U.S. citizens onboard, was the first to depart the country since U.S. forces officially withdrew Afghanistan last month. It landed in Doha, Qatar.

In recent days there had been a stand-off between the Taliban and organizers of several charter planes who had hoped to evacuate Americans and at-risk Afghans from Mazar-i-Sharif. The Taliban have said they would let passengers with valid travel documents leave, but that many of those at the northern airport did not have such papers.