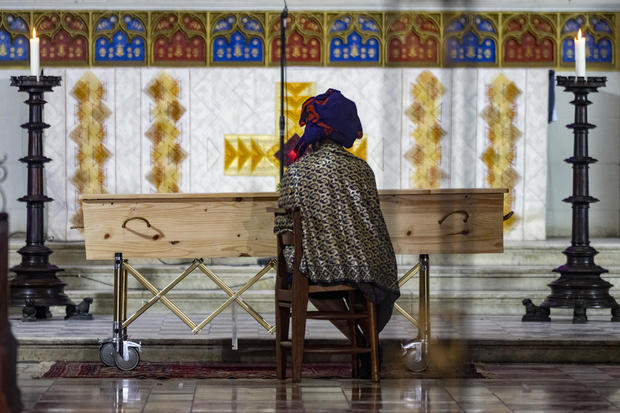 Anglican Archbishop Emeritus Desmond Tutu was remembered at a state funeral Saturday for his Nobel Peace Prize-earning role in ending South Africa’s apartheid regime of racial oppression and for championing the rights of LGBTQ people.

“When we were in the dark, he brought light,” Archbishop of Canterbury Justin Welby, the head of the worldwide Anglican church, said in a video message shown at a requiem Mass celebrated for Tutu at St. George’s Cathedral in Cape Town.

“For me to praise him is like a mouse giving tribute to an elephant,” Welby said. “South Africa has given us extraordinary examples of towering leaders of the rainbow nation with President Nelson Mandela and Archbishop Tutu …. Many Nobel winners’ lights have grown dimmer over time, but Archbishop Tutu’s has grown brighter.”

Tutu died last Sunday at age 90. His plain pine coffin, the cheapest available at his request to avoid any ostentatious displays, was the center of the service, which also featured African choirs, prayers and incense.

Tutu, who became an Anglican priest in the early 1960s, was awarded the Nobel prize in 1984 for his non-violent opposition to apartheid. He later became the first Black archbishop of Cape Town.

After South Africa achieved democracy in 1994, Mandela named Tutu to chair the Truth and Reconciliation Commission, a body created to report on human rights violations that took place during apartheid.

Throughout his life, Tutu actively promoted equal rights for all people and denounced corruption and other failures he saw in South Africa’s government, led by the African National Congress party.

“Archbishop Desmond Tutu has been our moral compass and national conscience,” South African President Cyril Ramaphosa, who delivered the funeral eulogy, said. “Even after the advent of democracy, he did not hesitate to draw attention, often harshly, to our shortcomings as leaders of the democratic state.”

Ramaphosa handed a national flag to Tutu’s widow, Leah, as she sat in a wheelchair.

The cathedral can hold 1,200 worshippers, but only 100 mourners were allowed to attend the funeral because of COVID-19 restrictions.

A few dozen people braved stormy weather to watch the service on a large screen in front of Cape Town City Hall. The municipal government building is where Tutu held hands aloft with Nelson Mandela on the day in 1990 when Mandela was released after serving 27 years in prison because of his opposition to apartheid.

Michael Nuttall, the retired bishop of Natal, delivered the sermon. Nuttall called his relationship with Tutu “an unlikely partnership at a truly critical time in the life of our country from 1989 through 1996, he as archbishop of Cape Town and I as his deputy,” With humor, he described himself as “No. 2 to Tutu.”

“Our partnership struck a chord, perhaps, in the hearts and minds of many people: a dynamic Black leader and his white deputy in the dying years of apartheid,” Nuttall continued. “And hey, presto, the heavens did not collapse. We were a foretaste, if you like, of what could be in our wayward, divided nation.”

Two of Tutu’s daughters, Mpho and Nontombi, both church ministers, participated in the service along with former Irish President Mary Robinson and Graca Machel, the widow of two African presidents, Samora Machel of Mozambique and Nelson Mandela.

The cathedral’s bells rang as Tutu’s casket was taken away after the funeral for a private cremation.

In keeping with Tutu’s commitment to the environment, his body will be “aquamated,” a process that uses water to prepare remains for final disposition. Tutu’s remains are to be interred at the cathedral where his funeral was held.

In the days before the funeral, several thousand people paid their respects to Tutu by filing by his casket in the cathedral and signing condolence books.