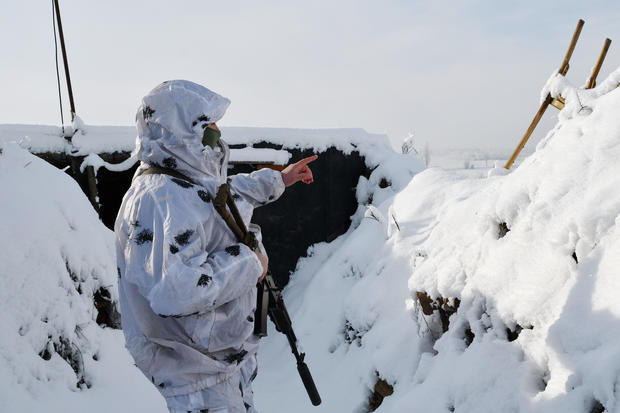 Eastern Ukraine — U.S. and Russian diplomats were meeting on Monday in Geneva, Switzerland, to try to defuse a potential military showdown in Ukraine. The U.S. and its allies, including Ukraine, are worried that Russia could invade its neighbor again, as it did in 2014 when Vladimir Putin’s forces seized the Crimean Peninsula.

CBS News senior foreign correspondent Holly Williams is in eastern Ukraine, speaking with military leaders who are preparing for a potential war with Russia, and hoping to prevent another land-grab.

The Cold War ended 30 years ago with the collapse of the Soviet empire. But Williams found Ukrainian soldiers fighting — with help from the United States — against separatists backed by Russia, and the U.S. government has warned that Russia could be on the brink of a new invasion.

On the frozen frontline of the conflict, Williams was led through icy trenches that have carved the country in two. Ukraine is an American ally that has been fighting a bloody, Russian-backed rebellion since 2014. More than 14,000 people have reportedly been killed in those seven years.

Commander Andriy, a 22-year veteran of Ukraine’s armed forces, is worried. He believes there’s a very real chance that Putin will order his forces to invade once again.

This winter, Russia has massed as many as 100,000 troops along Ukraine’s border. It has also tested its new hypersonic missiles, which may be capable of evading American air defense systems.

Some analysts believe a full Russian ground invasion, with tanks, artillery and armored vehicles rolling over the border, would only be possible after the ground here freezes solid, but in the trenches, troops told CBS News they believe it could happen any time.

Putin rejects the concerns voiced by Ukraine, the U.S. and its NATO allies, insisting that it’s Russia suffering at the hands of Western aggression. He has demanded security guarantees from the U.S. and NATO, including removing NATO troops from much of eastern Europe.

But some say Putin is playing a game of Cold War-style brinkmanship.

“He thinks that if he shows his power here, he shows violence here, in Ukraine… Western leaders can say, ‘Okay, we should deal with Putin and should treat him like we used to treat Soviet Union and communist leaders.'”

The U.S. has been helping to train Ukraine’s frontline soldiers. Last year, Washington supplied nearly half a billion dollars in military assistance, including anti-tank missiles. In two phone calls with Putin last month, President Biden threatened Moscow with more sanctions if Russia does invade, but he said he would not send American troops.

Some analysts think Putin believes the U.S. is in decline as a superpower, and that he senses an opportunity for Russia to gain clout on the world stage, at the expense of the democratic West.

“From his perspective, he thinks that democracy [is] becoming weaker, weaker and weaker,” Berezovets told Williams.

Hundreds of miles from the frontline, in Ukraine’s capital of Kyiv, they’ve renovated old bomb shelters for civilians to use in case of a Russian attack. Williams visited one of the shelters, which were originally built during the Cold War, when Ukraine was part of the Soviet Union and the enemy, ironically, was America.

Back on the frontline, the troops in the trenches want no part of a new, Russian empire, even if it means making the ultimate sacrifice to prevent it.

“All my soldiers, in this time, ready for battle,” Commander Andriy told CBS News.

“You’re all ready to die to save Ukraine from Russian invasion?” Williams asked him.

“Not only I, all my soldiers,” he replied.