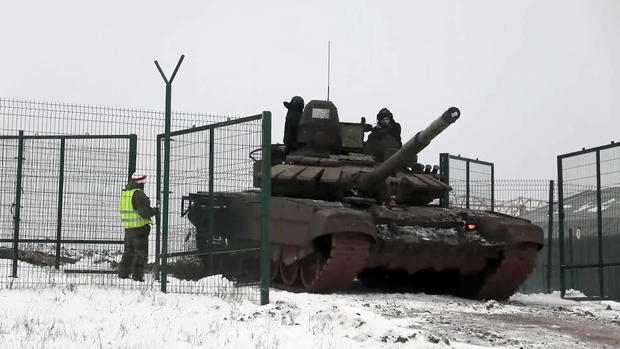 Kyiv — Russia and NATO are continuing their military buildup around Ukraine, including more Russian fighter jets just across Ukraine’s northern border in Belarus. Russia’s ongoing military exercises with its Belarusian allies have fueled fears that Russia could launch an invasion into Ukraine, as it did in 2014.

The U.S. and its NATO allies presented President Vladimir Putin’s government with a written response to his demands for “security guarantees” on Wednesday, hoping to keep the crisis on a diplomatic track. But in the meantime, CBS News senior foreign correspondent Holly Williams says America and its allies continue preparing for a possible Russian invasion.

On Thursday, Russia’s foreign minister said Putin had personally reviewed the response hand-delivered by the U.S. ambassador in Moscow. The reaction from Moscow indicated disappointment, but also a decision to keep talking, for now.

The biggest “guarantee” Putin’s regime sought is a commitment that NATO will rule out admitting Ukraine or any of its neighbors as new members of the trans-Atlantic security alliance, while also pulling forces back from Russian borders. NATO has bolstered troop and weapons deployments in the region — as a direct response to Russia moving some 100,000 of its forces close to Ukraine’s eastern frontier, and now to its north in Belarus.

The U.S. and NATO made it clear even before their formal response was delivered to Moscow that any ban on new NATO members in Eastern Europe was a “non-starter,” but they indicated a willingness to discuss other issues, including military exercises, weapons deployments in the region and other “trust-building” actions that could be taken by both sides.

“There was no positive response to the main question,” Russian Foreign Minister Sergey Lavrov said in a statement on Thursday, referring to Ukraine’s bid for NATO membership, but “there is a response which gives hope for the start of a serious conversation on secondary questions.”

But while diplomacy appeared set to continue, including bilateral talks expected in the coming days between Putin and France’s leader, both sides in the standoff are keeping the pressure on.

On Thursday, Moscow accused the U.S. of planning to position more missiles in the region. A senior foreign ministry official warned that such steps risked sparking a “new missile crisis.” His warning came weeks after Russia refused to rule out positioning military hardware in Venezuela or Cuba, which brought echoes of the 1962 Cuban missile crisis.

Six U.S. fighter jets arrived in Estonia, meanwhile, to take part in NATO military exercises. Slovakia’s foreign minister said on Thursday that NATO was considering deploying additional troops to his country, too. Estonia and Slovakia are both NATO members. Estonia shares its eastern boundary with Russia, while Slovakia sits just west of Ukraine.

NATO military deployments like those — in what Russia considers its own backyard — are something the Biden administration has indicated a willingness to negotiate on.

“The placement of offensive missile systems in Ukraine, military exercises and maneuvers in Europe — all of these things would address, I think, mutual concerns, including concerns stated by Russia,” Secretary of State Antony Blinken said on Wednesday as the U.S. response to Russia’s demands was delivered.

While the U.S. and its allies have made a point of stressing their unity in confronting Russia’s aggression, some of those allies rely heavily on Russia to meet their energy needs, including Europe’s largest economy, Germany. That has tested the alliance’s resolve.

Germany is the biggest buyer of Russian natural gas, and it has refused to send weapons to Ukraine.

But Germany’s top diplomat indicated on Thursday that the country was in lockstep with its NATO allies in confronting Russia via sanctions, at least — even if that means looking for other gas suppliers, with some help from Washington.

“We are working on a strong package of sanctions,” German Foreign Minister Annalena Baerbock told her nation’s parliament on Thursday, noting that those sanctions could impact the long-awaited switching-on of the new “Nord Stream 2” gas pipeline, which connects Russia’s suppliers directly with Western European consumers.

The U.S. has long pressured Germany to avoid increasing its dependency on Russian energy with the pipeline, and it seemed assurances from Washington — to help arrange alternate gas supplies if Germany backs sanctions that impact Russian energy sales — may have helped to get Berlin on board.

“Should Russia choose to weaponize its natural gas by cutting supply to Europe even more than it’s already done, we’re in discussions with governments and major producers around the world about surging their capacity,” Blinken said on Wednesday, alluding to discussions with U.S. allies in the Mideast who have their own gas fields.

But while both sides continue to dig in, literally and figuratively, along the frontier separating Russia and European democracies, the people of Ukraine remain stuck in the middle.

At the ornate, golden-domed St. Michael’s Monastery in Ukraine’s capital of Kyiv, where the faithful have worshiped for over 900 years, some Ukrainians told Williams that they’re praying for peace.

One woman told CBS News that she hopes God himself will talk some sense into Russia.

The U.S. said that with the handover of the response to Russia’s questions on Wednesday, the ball is back in Moscow’s court. With the Kremlin voicing disappointment, but not abandoning diplomacy, the next move is still hard to predict.