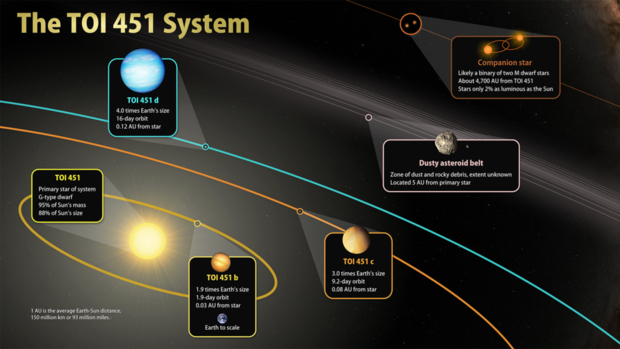 Floating in a stream of young stars, astronomers have spotted a trio of neighboring planets similar to Earth, orbiting a much younger version of our own sun.

The team found the young, hot worlds using observations from NASA ‘s Transiting Exoplanet Survey Satellite ( TESS ), according to a new study in The Astronomical Journal . The planets are orbiting a star called TOI 451.

The system is located in a newly-discovered Pisces-Eridanus stellar stream, which is less than 3% the age of our solar system, stretching across one-third of the sky. These so-called rivers of stars form when the gravity of our galaxy, the Milky Way, rips apart clusters of stars and dwarf galaxies, forming an elongated grouping that continues to disperse into a stream over time.

“This system checks a lot of boxes for astronomers,” said lead researcher Elisabeth Newton in a statement Friday. “It’s only 120 million years old and just 400 light-years away, allowing detailed observations of this young planetary system. And because there are three planets between two and four times Earth’s size, they make especially promising targets for testing theories about how planetary atmospheres evolve.”

The Pisces-Eridanus, named for the constellations with the highest number of stars, stretches across 14 constellations total — measuring about 1,300 light-years long.

“The sun of the newly discovered planets is like a teenager compared to our own sun. That means its planets are still changing and evolving,” said Newton.

All three planets are very hot and inhospitable to life as we know it, orbiting their star three times closer than Mercury ever gets to our sun. Temperature estimates range from about 2,200 degrees Fahrenheit for the innermost planet to about 840 F for the outermost one.

The closest planet orbits the star roughly every 2 days, while the farthest one circles about every 16 days. They range in size between that of Earth and Neptune.

While there are over 4,000 known planets outside of our solar system, most of them are older and much farther away from Earth than the newly-discovered system. According to the research team, only seven other young systems with multiple transiting planets have ever been found.

The trio gives astronomers the rare opportunity to study a group of growing planets. Researchers plan to continue studying the planets using NASA’s Hubble Space Telescope and its planned successor, the James Webb Space Telescope , to examine how systems like our own solar system evolve.

“By studying these planets in the context of others, we can piece together the picture of how planets form and develop,” Newton said.