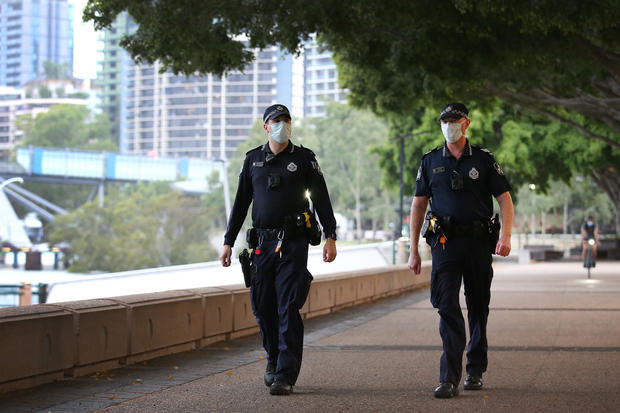 Brisbane, Australia — Australia’s third-largest city headed into lockdown and borders were set to tighten nationwide Friday, after a cleaner at a quarantine hotel contracted the U.K. coronavirus strain that officials say is more infectious. More than two million residents in the Greater Brisbane area will have to stay at home for at least three days from Friday evening, authorities said.

“If we are going to stop the spread of this infectious strain, this U.K. strain, we must act immediately,” Queensland Premier Annastacia Palaszczuk told media.

Large lines formed at shops around the city, prompting officials to urge people to stop panic-buying. The incoming restrictions will still allow residents to leave home to buy essentials.

Andy McPhee, 51, a Brisbane resident who works for an international firm, said the lockdown paled in comparison to what his colleagues overseas were experiencing.

“I don’t think a three-day lockdown is going to hurt us at all. I think it’s imperative to stamp out the virus,” McPhee told AFP. “One case becomes two and two cases become 10 so before you know it, it can get a bit out of control.”

British officials have said the variant, which first triggered warnings in the U.K. last month, appears to be between 50% and 70% more infectious than other COVID-19 strains more commonly detected in Australia.

Several U.K. and South African variant cases have been detected in travelers currently under mandatory quarantine in Australia in recent weeks.

But the Queensland case was the first to be contracted locally and is believed to have spread to a cleaner from a returning traveler isolating in a Brisbane quarantine hotel.

The city’s lockdown signaled a return of restrictions unseen since March. Residents have been ordered to stay home and told to wear masks when leaving for essential reasons only.

Following the announcement, authorities around the country restricted travel to and from Brisbane and tightened already tough rules on international arrivals.

Prime Minister Scott Morrison said all international travelers would now be required to undergo testing before flying to Australia.

The already low number of arrivals would also be temporarily reduced by 50 percent and a 14-day mandatory quarantine for all travelers will be retained.

“There are many unknowns and uncertainties in relation to the new strain, and so that’s why this precautionary approach, we believe, is very sensible,” Morrison said.

Researchers are scrambling to determine just how much more contagious the British variant — known as B.1.1.7 — is. Data outside Britain is limited.

Another key question is whether existing vaccines work against the new strain, with Pfizer on Friday reporting that preliminary findings were positive and the vaccines did appear to work .

Before the announcement, Brisbane was among several Australian cities enjoying a return to relative normality during the southern hemisphere’s summer.

The state of Queensland recorded no new cases of community transmission on Friday.

But recent outbreaks in Sydney and Melbourne had forced travel across state borders to be tightly restricted again amid mounting pressure on officials to hasten the vaccine’s rollout.

On Thursday, Morrison announced plans to bring forward the planned vaccine rollouts by weeks. They are now slated to begin in February.

Australia has recorded more than 28,500 COVID-19 cases and 909 deaths linked to the virus, in a population of about 25 million.