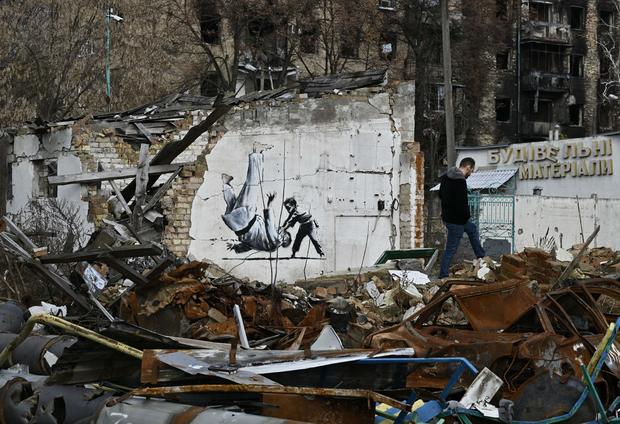 Banksy, the elusive British street artist, has painted a mural on a bombed-out building outside Ukraine’s capital, in what Ukrainians have hailed as a symbol of their country’s invincibility.

On Friday night, the world-famous graffiti artist posted on Instagram three images of the artwork — a gymnast performing a handstand amid the ruins of a demolished building in the town of Borodyanka northwest of the Ukrainian capital Kyiv.

Together with towns such as Bucha and Irpin, Borodyanka was severely hit by Russia’s bombardments and became a symbol of the devastation wrought by Moscow’s offensive since February.

The town was briefly occupied by Russian forces before they withdrew in April.

“It is a symbol that we are unbreakable,” 32-year-old Oleksiy Savochka told AFP on Saturday, referring to the graffiti. “And our country is unbreakable.”

A number of murals — in the style of Banksy — have appeared in and around Kyiv prompting Ukrainians to think that the anonymous street artist might be working in the war-ravaged country.

Another graffiti in Borodyanka — its origin unconfirmed by the artist — shows a little boy throwing a man wearing a judo uniform to the ground.

The scene could be a possible reference to Russian President Vladimir Putin, who is a martial arts enthusiast.

“It is a small boy against an old man and he is defeated, he’s already defeated,” Bogdan Mashay, a 30-year-old Ukrainian TV journalist, told AFP near the artwork.

“It’s unbelievable that Banksy is here in Borodyanka,” he added.

On the side of a ruined building in Irpin, a third mural — also unconfirmed by Banksy — shows a gymnast performing a ribbon routine despite apparently being hurt and wearing a neck collar.

Kherson was the first major urban hub to fall after Putin ordered Russian troops into Ukraine on Feb. 24.