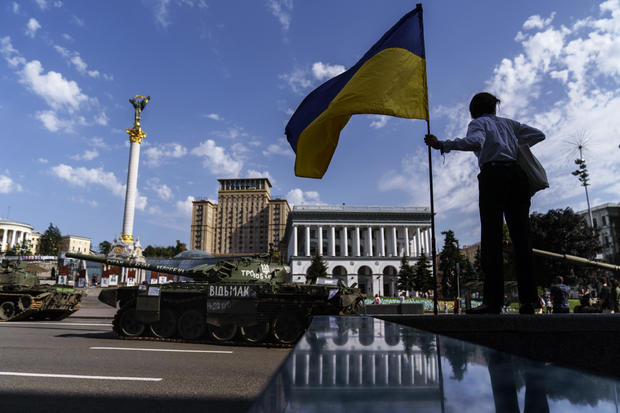 Washington — President Biden announced Wednesday that the U.S. is sending its largest security package to Ukraine to date, valued at $3 billion. The announcement coincided with the six-month anniversary of Russia’s invasion of Ukraine.

The package will come from the Ukraine Security Assistance (USAI) funds process, which means the U.S. will buy the weapons through contracts instead of drawing from existing Defense Department inventory and sending them immediately.

“The United States of America is committed to supporting the people of Ukraine as they continue the fight to defend their sovereignty. As part of that commitment, I am proud to announce our biggest tranche of security assistance to date: approximately $2.98 billion of weapons and equipment to be provided through the Ukraine Security Assistance Initiative,” Mr. Biden said in a statement. “This will allow Ukraine to acquire air defense systems, artillery systems and munitions, counter-unmanned aerial systems, and radars to ensure it can continue to defend itself over the long term.”

The administration has used the USAI process in previous security packages for items like medium-range air defense systems, surveillance drones and counter-artillery radar systems. The time it takes for the weapons to get to Ukraine depends on industry’s production lines.

The State Department issued an alert Monday that Russia might step up its efforts to launch strikes against Ukraine’s civilian infrastructure and government facilities in the coming days.

The occasion comes as the war grinds on in southern and eastern Ukraine.

A senior defense official told reporters last week that Russia is seeing “a complete and total lack of progress.” The official noted the Ukrainians are successfully striking Russian capabilities which could have a long term effect, but they haven’t retaken significant territory from Russia.