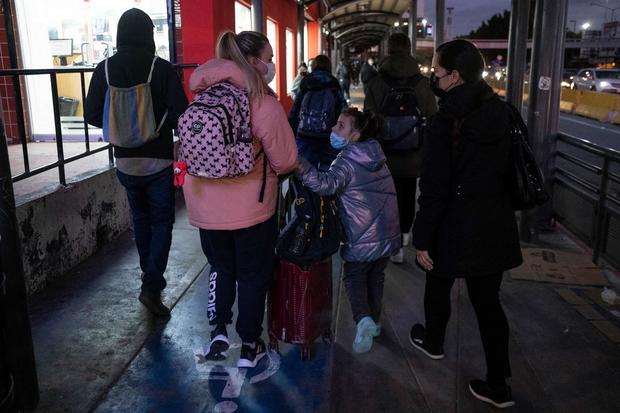 President Biden is facing intensifying pressure from his own party to stop deporting migrants under a pandemic-era border restriction that top Democrats in Congress on Thursday forcefully denounced as an “inhumane” Trump administration relic that skirts U.S. asylum laws.

Senate Majority Leader Chuck Schumer joined other Democratic lawmakers in urging Mr. Biden to halt the expulsion policy, which has allowed U.S. border agents to expel migrants over 1.6 million times in two years. He called the policy, known as Title 42, an illegal program with “disastrous” consequences for asylum-seekers.

“Now, more than a year since the Biden administration took office, it’s unacceptable that this policy continues to be used indiscriminately to remove migrants with valid refugee claims from our southern border,” Schumer, a New York Democrat, told reporters during a call hosted by advocates for migrants.

Under Title 42, migrants are rapidly expelled to Mexico or their countries of origin without being allowed to request U.S. protection. Like the Trump administration, the Biden administration has argued the policy is needed to minimize the risk of coronavirus outbreaks inside border detention facilities.

To make his case, Schumer on Thursday cited the story of Sofiia, a Ukrainian mother who was turned back at the U.S. southern border on Wednesday. “This is not who we are,” he said.

Sofiia and her three children — ages 14, 12 and 6 — left Ukraine after Russian forces attacked late last month, fleeing to Moldova and then to Romania, according to the family’s lawyer, Blaine Bookey. The family then flew to Mexico and tried to seek U.S. asylum at the port of entry connecting Tijuana and San Diego.

The family hoped to reunite with relatives in California. But they were turned back by U.S. officials at the port of entry multiple times, said Bookey, who accompanied the family during one of the attempts on Wednesday.

“I spoke with the CBP supervisor, who told me Title 42 is in place and there are no exceptions, and unless they are told otherwise from someone on high, she will not be getting in,” Bookey, an attorney with the California-based Center for Gender and Refugee Studies, told CBS News.

Bookey said the way the U.S. initially treated the family contradicted the Biden administration’s vocal support for the more than 2.3 million people who have fled the conflict in Ukraine over the last two weeks.

“How can the administration express support for Ukrainians and provide protections to Ukrainians, and then at the same time keep in place this policy that has no basis in public health, violates our laws and puts people in these dangerous conditions?” Bookey asked.

Still, Bookey said Sofiia and her children were relatively lucky, noting that many migrants she recently met in Tijuana, including a Haitian mother with three children, have been blocked from requesting U.S. refuge.

Along with growing Democratic criticism, the Biden administration’s continuation of Title 42 has been complicated by two dueling court rulings last week that could prompt the Centers for Disease Control and Prevention to modify, or even scrap, the public health order authorizing the expulsions.

Last Friday, an appeals court in Washington, D.C., barred U.S. officials from expelling families with children to countries where they could be persecuted or tortured, while a federal judge in Texas ruled that the administration could not continue exempting unaccompanied children from the expulsions.

The first ruling is not set to be binding until next month, but the second one is slated to take effect on Friday and could force the administration to revive the Trump-era practice of expelling unaccompanied minors.

The Justice Department has yet to appeal either ruling or request their suspension. Representatives for the Department of Homeland Security, which oversees border agents, did not explain how they plan to comply with the rulings or respond to Democratic criticism of Title 42.

Representatives for the CDC, which is supposed to decide whether to keep, change or terminate its Title 42 order by early April, did not immediately respond to a request for comment.

Considering the recent rulings, the Biden administration should end Title 42 altogether and stop defending it in federal court, said New Jersey Senator Bob Menendez, the Democratic chair of the Senate Foreign Relations Committee. “Expelling children is not who we are as a nation,” he said during the call with Schumer.

While they have criticized other pandemic restrictions, Republican lawmakers have strongly backed Title 42 and would likely criticize the Biden administration for ending the policy. In fact, they have accused the administration of not using Title 42 broadly enough, criticizing the release of some migrants allowed to stay in the U.S.

But Menendez said Title 42’s termination would align with the recent relaxation of other pandemic restrictions, such as mask mandates. He said officials may have had some “space” early on in the administration to enforce Title 42 due to the lack of vaccines and other pandemic conditions. But “that space is now closed,” he said.