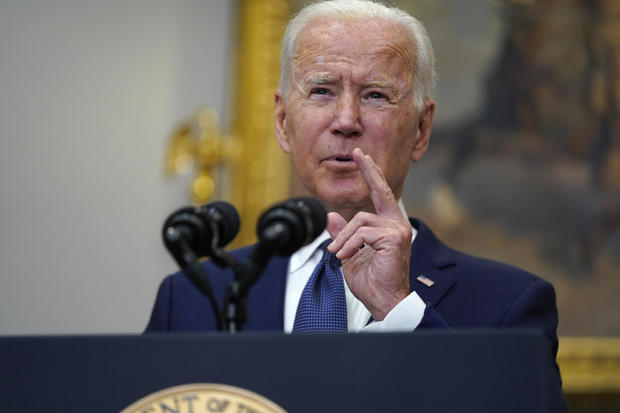 Washington — President Biden warned Sunday his administration’s efforts to evacuate thousands of American citizens and Afghan allies from Kabul following the Taliban’s rapid takeover of the country was going to be “hard and painful” regardless of when the mission began, as work getting people out of Afghanistan ramps up.

“Let me be clear, the evacuation of thousands of people from Kabul is going to be hard and painful, no matter when it started, when we began, would have been true if we had started a month ago, or a month from now,” Mr. Biden said in remarks about the ongoing chaos in Afghanistan. “There is no way to evacuate this many people without pain.”

The president continued to stress his administration’s “first priority” in Kabul is evacuating U.S. citizens “as quickly and as safely as possible,” and said discussions are taking place about keeping American forces in Afghanistan after August 31, his deadline for completing the U.S. withdrawal.

“Our hope is that we will not have to extend, but there are going to be discussions I suspect on how far along we are in the process,” Mr. Biden said.

The president met with members of his national security team throughout the weekend to discuss efforts to get Americans and Afghan allies out of the country, canceling a trip to Delaware to remain in Washington.

Over the last 36 hours, 11,000 people have been shuttled out of Kabul, Mr. Biden said, an “extraordinary amount.” Since mid-August, 28,000 have been evacuated from the country, and the president said his administration expects the pace to continue.

The president estimated in an interview with ABC News last week there are between 10,000 and 15,000 U.S. citizens who remain in Afghanistan.

“At the end of the day, if we didn’t leave Afghanistan now, when did we leave? Another 10 years? Another five years? Another year?” Mr. Biden said, defending his decision to pull U.S. troops out of the country, in response to a question from CBS News’ Ed O’Keefe. “I’m not about to send your son or your daughter to fight in Afghanistan.”

Since the Afghan government collapsed last week, which sparked chaos outside Hamid Karzai International Airport that led to several deaths, the Biden administration has scrambled to ramp up evacuations of U.S. citizens and Afghans, including those who have applied for Special Immigrant Visas and face threats from the Taliban.

The U.S. embassy in the capital city warned Americans on Saturday not to travel to the airport and avoid airport gates due to ongoing security threats, and the president acknowledged the “security environment” is rapidly changing.

“We know that terrorists may seek to exploit the situation,” he said, adding the U.S. is maintaining a “constant vigilance” to monitor and disrupt threats.

To aid in evacuation efforts, Defense Secretary Lloyd Austin authorized the use of 18 commercial aircraft from six U.S. airlines to carry evacuees from locations outside of Afghanistan. Secretary of State Antony Blinken told “Face the Nation” on Sunday the U.S. has agreements with more than 24 countries to serve as transit points for those evacuating from Afghanistan, where they will be sent for further processing before traveling to their final destinations.

Mr. Biden said those who aren’t U.S. citizens will undergo security checks in those countries before moving on to their final destination in the United States or another country.

“Once screened and cleared, we will welcome these Afghans who helped us in the war effort over the last 20 years to their new home in the United States of America. Because that’s who we are,” Mr. Biden said.

Blinken said the U.S. has also been in “direct contact” with Americans attempting to leave Afghanistan and is instructing them on the best way to the airport in Kabul, and where and when to go there.

Mr. Biden said his administration is reaching out to U.S. citizens in Afghanistan by phone, email and “other means” to learn their whereabouts and is “executing a plan” to move groups of Americans safely to the airport compound.

The president would not elaborate on what those plans entail, but reiterated that “any American who wants to get home will get home.” Additionally, the military has “increased rational access” to the airport to allow more people to get there safely.

Mr. Biden also addressed Tropical Storm Henri, which made landfall along the coast of Rhode Island around 12:15 p.m. In anticipation of the storm, the president approved emergency declarations for New York, Connecticut and Rhode Island, unlocking access to federal resources for the states.

“We don’t know the full extent of the storm’s impact today, but we’re acting to prepare for and prevent damage as much as possible,” he said.

Mr. Biden said the storm, while downgraded from a hurricane to a tropical storm, has the potential for “widespread consequences” across New England, including significant flooding and power outages.

“We’re doing everything we can now to help those state prepare, respond and recover,” he said.