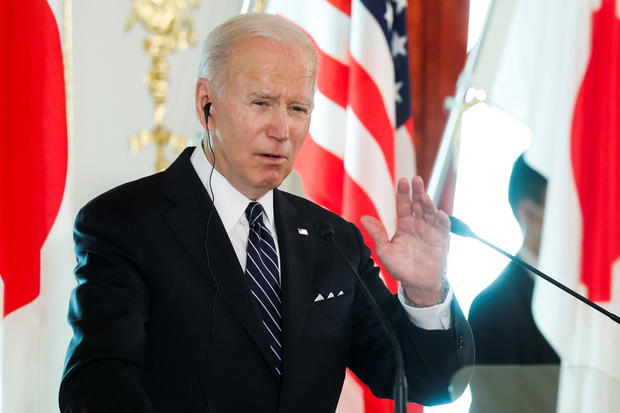 President Joe Biden said Monday that the U.S. would intervene militarily if China were to invade Taiwan, in one of the most forceful and overt statements in support of Taiwan in decades.

Mr. Biden said the burden to protect the self-ruled island was “even stronger” after Russia’s invasion of Ukraine.

Speaking at a joint news conference in Tokyo with Japanese Prime Minister Fumio Kishida, Mr. Biden said, “That’s the commitment we made.”

He said an effort by China to use force against Taiwan would “just not be appropriate,” adding it would “dislocate the entire region and be another action similar to what happened in Ukraine.”

Under the “One China” policy, the U.S. recognizes Beijing as the government of China and doesn’t have diplomatic relations with Taiwan. However, it maintains unofficial contacts with Taiwan, including a de facto embassy in Taipei, the capital. The U.S. also supplies military equipment for the island’s defense.

Mr. Biden also said Russia “has to pay a long-term price” for its “barbarism in Ukraine” in the form of sanctions on Moscow from the U.S. and its allies.

He said Russian President Vladimir Putin is trying to eliminate “the identity of Ukraine” since he “can’t occupy it.”

The president said if “the sanctions are not continued to be sustained in many ways, then what signal does that send to China about the cost of attempting to take Taiwan by force?”

When asked if a recession is inevitable in the U.S., Mr. Biden said simply, “No,” despite record high inflation and supply shortages partly caused by Russia’s invasion of Ukraine.

He acknowledged that the American economy has “problems” but said it was better positioned than other countries.

Mr. Biden acknowledged impact that severe supply shortages and high energy prices are having on U.S. families. He said his administration was working to ease the pain for U.S. consumers, but said  immediate solutions were unlikely.

On another matter, he sought to calm concerns about recent cases of monkeypox that have been identified in Europe and the United States, saying he didn’t see the need to institute strict quarantine measures.

Speaking in Tokyo a day after he said the virus was something “to be concerned about,” the president said, “I just don’t think it rises to the level of the kind of concern that existed with COVID-19.”

Monkeypox is rarely identified outside of Africa. But as of Friday, there were 80 confirmed cases worldwide, including at least two in the United States and another 50 suspected ones. On Sunday, one presumptive case of monkeypox was being investigated in Broward County in South Florida, which state health officials said appeared to be related to international travel.

Although the disease belongs to the same virus family as smallpox, its symptoms are milder. People usually recover within two to four weeks without needing to be hospitalized, but the disease occasionally is deadly.

Mr. Biden said the smallpox vaccine works for monkeypox. Asked whether the U.S. has enough stockpile of that vaccine to handle the monkeypox spread, he replied, “I think we do have enough to deal with the likelihood of a problem.”

If approved by the world body, Japan would join the U.S., Britain, China, France, Russia, and the U.S. as permanent members.