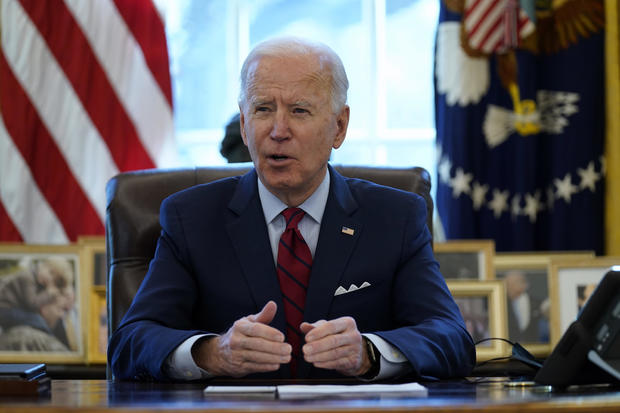 Mr. Biden plans to sign an executive order rescinding the proclamation that suspended certain immigrant and work visas, Esther Olavarria told U.S. mayors over the weekend, according to a recording of the virtual meeting shared with CBS News. Olavarria is deputy director of the White House Domestic Policy Council and one of the president’s top immigration advisers.

The upcoming order, Olavarria said, “would rescind the Trump proclamations that precluded the admission of immigrants and non-immigrants either deemed to be a financial burden on our health care system or deemed to present a risk to U.S. labor markets.”

“These were policies that ignored the decades, and centuries actually, of contributions that immigrants have made to our economy, to our society, to our culture,” Olavarria said during the United States Conference of Mayors’ 89th winter meeting. “So we would rescind those policies and return to a country that welcomes immigrants and acknowledges their contributions.”

It is unclear when Mr. Biden intends to sign the proclamation, but his plans to issue several immigration actions on Friday have been delayed . The White House did not provide any comment.

Olavarria’s remarks represent the first indication of the Biden administration’s views on the visa limits. During the campaign and transition, Mr. Biden did not address the policy, nor did his advisers commit to revoking it.

Less than a month before Mr. Biden took office, Mr. Trump ordered a three-month extension of the restrictions, which were first enacted in April 2020 as a ban on some prospective immigrants and broadened in June to also suspend several temporary work visas, like the H-1B program.

Mr. Trump’s proclamation, which is currently set to expire on March 31, prohibits the issuance of some immigrant visas for people seeking to move to the U.S. permanently through green card petitions filed by their U.S. family members or prospective employers.

Spouses and children 21 or younger of U.S. citizens are not subject to the visa limits, which also exempt some health care workers fighting the pandemic, as well as wealthy immigrants who agree to invest more than $1 million in U.S. projects.

Mr. Trump’s proclamation also froze the diversity visa lottery, a program that allows people from underrepresented countries, many of them in Africa, to move to the U.S. In September, a federal judge ordered the government to issue visas to more than 9,000 would-be immigrants who won the lottery last year, but they remain barred from entering the U.S. under the proclamation.

The restrictions have also halted the issuance of several temporary visas used by people to work in the U.S., including the H-1B program that is popular in the tech sector and H-2B visas for non-agricultural seasonal workers. Cultural exchange J-1 visas for au pairs and other short-term workers; visas for spouses of H-1B and H-2B holders; and L visas for companies to relocate employees to the U.S. have also been restricted.

The government is currently barred from applying the visa limits on workers sponsored by several major U.S. companies because of a court ruling in October.

Sarah Pierce, a policy analyst for the non-partisan Migration Policy Institute, said Mr. Trump’s pandemic-era visa restrictions have had “some staying power” because they were enacted on economic grounds. While she believes the limits do not benefit U.S. workers, Pierce predicted that lifting them will fuel some pushback.

Convincing a segment of the U.S. population that the restrictions need to be rescinded will not be an easy task, Pierce said, citing the current 6.7% unemployment rate.

“The economic crisis is still here and it’s a huge problem for the United States,” Pierce told CBS News. “Biden is going to have to present reasons for why he feels it’s right to undo these proclamations despite their supposed benefits to the U.S. economy.”

Pierce’s group estimates that more than 8,000 green card petitions were blocked between April and November 2020 due to Mr. Trump’s restrictions.

Olavarria said Mr. Biden will also rescind a proclamation Mr. Trump issued in October 2019 to allow the government to reject visa applications from immigrants it determines will not be able to pay for health insurance or cover medical costs in the U.S.

According to an outline of expected executive actions obtained by CBS News, Mr. Biden is planning to sign an additional directive instructing officials to review the “public charge” rules that allow consular and immigration officers to deny green card and visa petitions from applicants deemed to rely, or be at risk of relying, on public assistance, like food stamps.