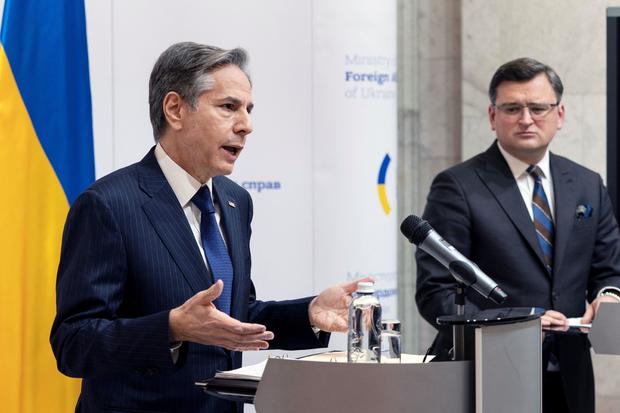 Secretary of State Antony Blinken warned on Wednesday that Russia has positioned itself to attack Ukraine on “very short notice,” even as he urged Moscow to pursue a “diplomatic and peaceful path.”

In remarks to U.S. embassy staff in Kyiv, the Ukrainian capital, Blinken said Russia’s buildup of 100,000 troops had made it “a critical time for Ukraine.”

Blinken’s visit to Kyiv is the first of three stops in a last-minute diplomatic push that includes meetings with counterparts from Germany, France and Britain on Thursday and culminates in an in-person meeting in Geneva with Russian Foreign Minister Sergei Lavrov on Friday.

While in Kyiv, Blinken offered a measured lookahead to the meeting in Geneva. “[W]e’ll see where we are at the end of the week,” he said, adding, “I strongly, strongly hope that we can keep this on a diplomatic and peaceful path, but ultimately that’s going to be President Putin’s decision.”

Blinken’s engagements follow a week of mostly fruitless diplomatic talks that the Russians claimed had hit a “dead end.” Moscow has for weeks made a set of public demands for binding security guarantees from the West that the NATO alliance will not expand eastward to include Ukraine as a member, and to reduce the troops and weaponry currently deployed in eastern and Baltic European states.

The U.S. and NATO have dismissed those Russian demands as “non-starters” while offering to begin talks on other security issues like arms control.

Following meetings with President Zelenskyy and Foreign Minister Dmytro Kuleba on Wednesday, Blinken told reporters that he would not be providing written responses on Friday to Russia’s demands — an expectation Moscow has raised repeatedly.

“I won’t be presenting a paper at that time to Foreign Minister Lavrov. We need to see where we are and see if there remain opportunities to pursue the diplomacy and pursue the dialogue, which again, as I said, is by far the preferable course,” Blinken said.

He also urged unity on the part of the Ukrainian government, which has been beset by domestic political turmoil even as the threat of Russian aggression mounts.

“Our strength depends on preserving our unity, and that includes unity within Ukraine,” Blinken said. “I think one of Moscow’s longstanding goals has been to try to sow divisions between and within countries, and quite simply, we cannot and will not let them do that.”

U.S. officials have issued increasingly urgent warnings about the potential for a Russian invasion in recent days. Last Friday, the Biden administration accused Moscow of prepositioning trained operatives in Ukraine who could carry out “acts of sabotage” against Russian proxy forces to create a pretext for invasion.

Yesterday, a senior State Department official said Russia’s recent movement of troops and hardware into neighboring Belarus was “neither an exercise nor normal troop movement,” and could open up another front in a potential invasion.

At a think tank in Moscow on Wednesday, Russian Deputy Foreign Minister Sergei Ryabkov again denied that the Kremlin had any plans to invade Ukraine.

“I am certain that there is no risk of a large-scale war which might break out in Europe or anywhere else,” he said, Russian state media reported. “We do not intend to take any aggressive actions. We will not attack, raid or invade Ukraine.”

But he reiterated Moscow’s demands on curtailing future NATO expansion.

“The priority for us is to achieve solid legally binding assurances from the United States that [Ukraine], along with the other countries we have already mentioned, will not become NATO members,” Ryabkov said.