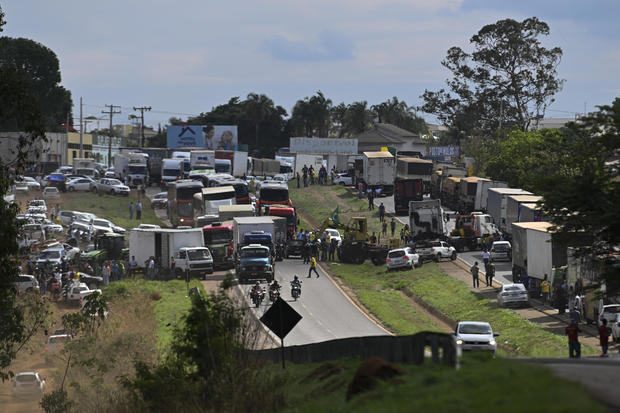 Rio de Janeiro — Truckers and other protesters on Tuesday blocked highways for a second day in support of President Jair Bolsonaro, who had yet to accept his election loss to leftist Luiz Inacio Lula da Silva.

During a short speech on Tuesday, Bolsonaro said he would “comply” with the constitution, but did not reference his election loss. However, his chief of staff Ciro Nogueira took to the podium to say Bolsonaro had “authorized” the “transition” process.

Bolsonaro also said that any protests should be “peaceful” and not cause harm, after his supporters blocked roads around the country following his election defeat.

“Peaceful protests will always be welcome. But our methods must not be those of the left, which always harm the population, like invading property… and impeding the right to come and go,” he said in his first comments since Sunday’s election.

In Novo Hamburgo, near the southern city of Porto Alegre, police fired teargas on Tuesday to break up a protest on one major highway, according to an AFP photographer.

The executive director of the Federal Highway Police (PRF), Marco Antonio Territo de Barros, told a press conference in the capital Brasilia that there were 267 road blockages underway across the country and that 306 had already been dispersed since Sunday.

A banner reading “Lula No!” hung off a bridge in Sao Paulo.

“I hope that I can go back home,” said 62-year-old real estate agent Rosangela Senna at a bus station in Sao Paulo, where she was unable to take her bus back to Rio. “I could afford to pay for a day to sleep in a hotel here but many people had to wait right here at the bus station.”

Bolsonaro, often referred to as the “Tropical Trump” for his similarities to the former American president, had yet to concede defeat after official results showed Lula won the presidential election by just 1.8 percentage points.

There were fears in Brazil that Bolsonaro, 67, could attempt a Brazilian version of the Jan. 6, 2021, U.S. Capitol riots, which rocked the U.S. after former U.S. President Donald Trump refused to accept his election defeat in 2020.

But the Brazilian leader may find himself isolated. Some key Bolsonaro allies have publicly recognized his loss, including the powerful speaker of the lower house of Congress, Arthur Lira, and while the president himself has remained largely silent since the election results were announced, leaders from across the globe — including allies of Bolsonaro in China and Russia — offered their congratulations to Lula.

Brazil’s Communications Minister, Fabio Faria, told the Reuters news agency that Bolsonaro would address the nation later on Tuesday and would not contest his defeat in the polls, though there was no immediate confirmation from the president himself.

The state with the most roadblocks was southern Santa Catarina, where almost 70% of voters backed Bolsonaro in the election.

A Supreme Court judge on Monday night ordered the “immediate clearing of highways and public roads,” in a statement.

The court ordered the PRF to take “all measures” needed to free the roads, threatening to fine or imprison its director for “disobedience” if the order was not carried out.