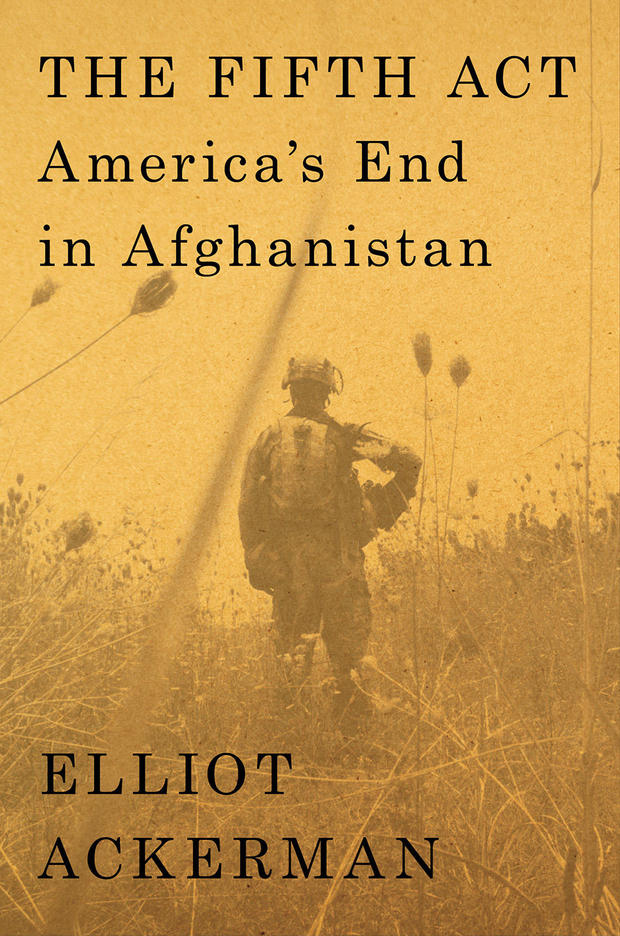 In “The Fifth Act: America’s End in Afghanistan” (published by Penguin Press on August 9), Elliot Ackerman, who served four combat tours in Afghanistan with the Marines and the CIA, writes of how his mission continued, in seeking to rescue an Afghan and his family from the country’s fall to the Taliban.

The US Naval Academy

It’s twenty years to the day since 9/11. As planned, Josh has flown up with his son, six-year-old Weston, and we’re awake early getting ready to take our boys to the Navy versus Air Force football game. Josh arrived the night before, from Wilmington—not far from Camp Lejeune—where he settled after medically retiring from the Marine Corps. Had it not been for his leg wound, I always imagined that Josh would’ve stuck around the Corps and tended to the organization; he would’ve made a fine general. Instead, he’s made himself into a successful businessman. He once joked with me that he’d done every quintessential thing a person could do as an American: he’d gone to war; he’d started a family; he’d built and taken a business public. He laughed telling me this, but also admitted that he wasn’t certain what came next.

The night he arrived, after we’d put the boys to bed, he and I had stayed up late, talking over drinks about this very same subject. Specifically, we were discussing Afghanistan’s future, but that conversation had a subtext; it was entwined with what would come next for each of us now that our war was at last over. This summer, about a week before Kabul fell, Josh had sent me a video. It was of a battalion of Afghan commandos as they prepared for one of their final offensives, a desperate helicopter assault into Lashkar Gah, the then-besieged capital of Helmand Province. The video was shot in dark, midnight tonalities. The heavily armed commandos marched in formation out to the helicopters that awaited them on the tarmac. In Dari they shouted, “God is great!” followed by “Long live Afghanistan!” It had been years since Josh had been in Afghanistan, but he confessed that seeing that video made him long to return. He felt like he should’ve been loading onto those helicopters. Watching that video had made me want to return too. Or, put another way, it had reminded me that no matter how far my life progressed beyond the war—in family, in work, in friendship—the war always had its hold over me, calling me back. Josh was, as we sat at my dinner table, giving me a bit of s*** for the video I’d sent to him in response, which was a favorite scene from The Princess Bride. It’s from the end of the movie, after the Spanish swordsman Inigo Montoya has killed the six-fingered man and avenged his father’s death. He turns to his good friend Westley, the stable boy turned pirate, and says wistfully, “You know, it’s very strange. I have been in the revenge business so long, now that it’s over I don’t know what to do with the rest of my life.” To which Westley replies, “Have you ever considered piracy? You’d make a wonderful Dread Pirate Roberts.” Josh was class of 2001 out of the Naval Academy. He was in the revenge business for a long time.

After the bombing at Abbey Gate, our ability to get Afghans into the airport came to a standstill; however, the number of Afghans trying to leave only seemed to increase. As it became obvious that the window for departures had narrowed to a sliver, those Afghans who’d thought to bide their time until conditions at the airport improved now seemed willing to take risks they wouldn’t have considered a week before. Josh was curious how the final few days of the evacuation had gone from my perspective. Most of my efforts, I explained, now centered on helping a family Admiral Mullen was trying to get out. They were nine in total, to include four small children. The patriarch of the family, who I’ll call Aziz, had worked at the US embassy. His brother, who’d worked as a driver for a senior government minister, had already been assassinated by the Taliban, while the minister himself had slunk away, boarding a plane out of HKIA in the early days of the evacuation.

Aziz primarily sends me voice notes. I play a few of them for Josh, beginning with one that Aziz recorded on the night of Abbey Gate. He had been nearby, like so many others trying to get into the airport, when the bomb went off. “Hello, sir, I hope you’re doing good,” Aziz begins, with a tremor in his voice. “We just moved back and are trying to go somewhere else. We don’t want to get caught by Taliban, because they are looking everywhere, place by place, home by home, street by street, looking for us. We don’t want to be recognized by them. I was so close to that explosion and the mark of blood is all over on my clothes. All the family is so scared. Sir, I am waiting for your next call. If it’s possible, sir, it would be so good to, um, uh …” Aziz stumbles over his words for a moment before regaining enough composure to say, “I’m not in a condition to talk clearly. I can get close or near to the airport. If it’s possible to pick us up, it would be good. For now, all the family is in very bad condition. They’re so scared. Kids are so scared. Everyone is in bad condition.”

I play Josh another message from Aziz, this one from only a couple of days ago. After the final flight of Americans left the airport in Kabul, Aziz traveled north, with all nine of his family members crammed into a taxi, to Mazar-i-Sharif, where his family and others are hiding in a safe house, awaiting a flight that may or may not come. The safe house isn’t really a house, but a wedding hall rented out at an exorbitant rate by private donors who are footing the bill for this evacuation. He’s been there about a week. There’s about a week’s worth of funding left to pay for the safe house. The Taliban have been to his home in Kabul. Once that funding runs out, if he hasn’t gotten out on a flight, he’ll have nowhere to go. Aziz’s message comes with a video as he films the squalor of the wedding hall, the children wandering around aimlessly, the families sleeping beneath the stairways and others sleeping in the open hall itself, on filthy carpets, with empty bottles of water and other bits of trash strewn about. “Please, sir, please,” he says, “I want you to help me, my family, my kids. This is not a safe place. I’m going to shut down my cell phone and put it somewhere. I’m just completely lost. I don’t know what to do.”

Josh asks whether I think Aziz will get out. I describe some recent complications. Kam Air, the largest Afghan-based private airline, is the only one the Taliban will allow to fly. A few nights before, Aziz’s flight had been cleared. But in a corrupt scheme, the Kam Air pilots had offered their seats to the highest bidder, in effect double-selling the flight for millions in profit. This caused a delay. Then, once that problem was resolved, the flight was again cleared, but at the last moment a local Taliban commander blocked its departure because he had not received a payout. The day after that, it was an issue with Qatari landing clearances in Doha. Currently, the US State Department was holding up the flight with a demand that every Afghan on board have a passport, to include children older than age one. Aziz’s children don’t have passports. After enumerating these difficulties, Josh asks how often I’m receiving messages like this from Aziz.

I tell him about every day.