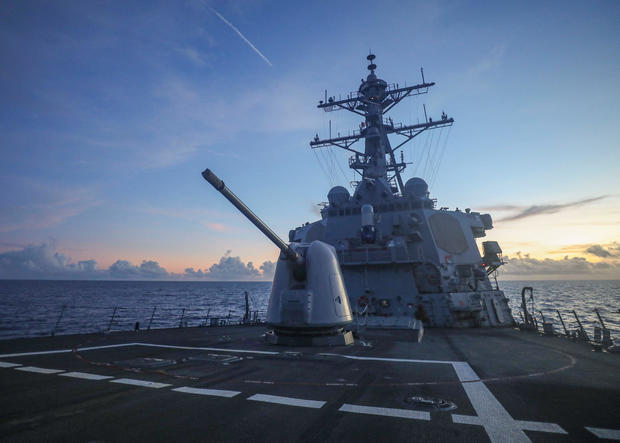 Beijing — The U.S. Navy on Wednesday sailed a destroyer close to China-controlled islands in the South China Sea. Washington said the patrol was aimed at asserting freedom of navigation through the strategic seaway, virtually all of which China claims as its territorial waters.

The guided-missile destroyer USS Benfold sailed past the Paracel Islands and continued thereafter with operations in the South China Sea. The operation “upheld the rights, freedoms, and lawful uses of the sea,” the U.S. Navy’s 7th Fleet said in a news release.

Such operations are considered key to the U.S. Navy maintaining its presence in the Indo-Pacific, where China has sought to grow its own presence through a massive ship building campaign.

Beijing has also alarmed the U.S., Australia and New Zealand with the signing of a mutual defense agreement with the Solomon Islands, under which it could receive Chinese troops in emergencies and possibly establish a permanent Chinese military presence.

In response to the Benfold’s passage, China’s Southern Theater Command tracked the vessel’s movements and ordered it to leave the area, Air Force Col. Tian Junli was quoted as saying on the Defense Ministry’s website.

The statement attributed to Junli said the American warship had “illegally entered” China’s territorial waters and that the Chinese army “organized naval and air forces to track and monitor it, send warnings and drive it away.”

China claims ownership over virtually the entire South China Sea. Around $5 trillion in global trade passes through the strategic waterway each year, and it also holds highly valuable fish stocks and undersea mineral resources. The Philippines, Brunei, Malaysia, Vietnam and Taiwan all lay competing claims to the waters.

Over recent years, as China has built bigger, more advanced navy vessels and developed its military infrastructure across the region, all while vowing to assert complete control over democratically governed Taiwan, by force if necessary.

The U.S. and its allies have responded with the so-called freedom of navigation patrols in the South China Sea and the Taiwan Strait, the narrow body of water that separates mainland China from the small autonomous island. The patrols sometimes encounter pushback from China’s military.

U.S. Secretary of State Antony Blinken last month said China represented the “most serious long-term challenge to the international order” for the United States with its maritime claims and its mounting rhetoric about exerting control over Taiwan.