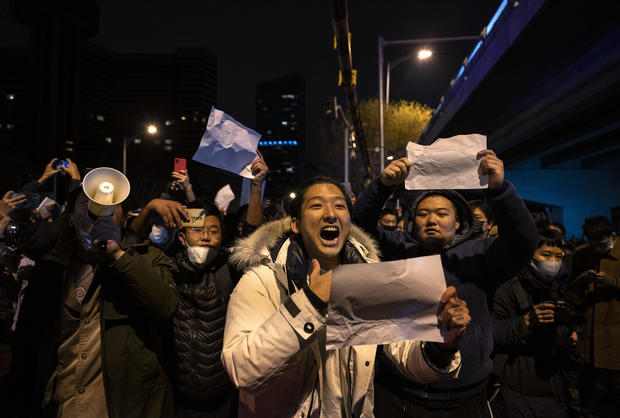 Thousands took to the streets in China over the weekend in the largest public protests the country has seen in decades. Demonstrators gathered in at least ten cities — including Shanghai and Beijing — calling for the resignation of President Xi Jinping over draconian COVID-19 policies that have seen hundreds of millions of people fenced into their apartment buildings.

On Sunday night, CBS News spoke with one of the demonstrators as she joined a crowd of protesters on the streets of Shanghai. The woman, whose identity we’re protecting because speaking with the media could get her arrested, said residents were “very angry” over the rolling lockdowns that have disrupted life in China for years.

She said she and her friends don’t support the Chinese government’s management of COVID, adding, “Nobody around me supports the policy.”

As she spoke, police rushed the crowd of protesters, and the woman was dragged away by friends.

In videos circulated online, other protesters on the streets could be heard chanting, “Down with Xi Jinping!” and “Down with the Communist Party!” — things that, until now, few people in China would have even dared to say out loud.

It’s not clear how many people were arrested over the weekend, though The Associated Press reports that dozens were taken away in police vans in Shanghai alone.

Among those detained was a BBC News journalist who said he was kicked and beaten during his arrest and held for hours before being released. Chinese authorities said he had not volunteered his press credentials when asked for them.

The BBC journalist said he believed that at least one Chinese national had also been arrested as they tried to stop police from beating him.

“Media freedom and freedom to protest must be respected. No country is exempt,” Cleverly said.

A fire that sparked protests

An apartment fire in the western Xinjiang region last week appeared to have been the final straw that pushed people to their breaking points. Ten people were killed in the blaze, prompting an angry crowd to gather around government offices, convinced strict COVID restrictions had prevented residents from escaping the blaze.

It was a nightmare scenario for the many Chinese people who live in similar apartment buildings, and who feared being similarly trapped because of strict COVID-19 lockdown restrictions. During the course of the COVID-19 pandemic, there have been other horror stories of children or old people dying in lockdown because of lack of access to medical care.

Video and audio clips which purportedly featured residents of the Xinjiang apartment begging to be released from the building to escape the fire were circulated online, further stoking public anger.

Authorities have denied that COVID restrictions were the cause of the deaths, but people started holding vigils in sympathy with the victims. Some held up blank pieces of paper to symbolize the way critical voices are silenced in China.

Officials in the region of the fire said over the weekend they would start easing the area’s COVID restrictions by opening up certain areas deemed low risk, and on Monday the city government of Beijing said they would no longer construct gates to block access to apartments where COVID-19 infections are discovered.

But Sunday night, largely peaceful, but utterly unprecedented dissent had spread around the country, even to the capital Beijing.

At a regular daily briefing on Monday, Chinese Foreign Ministry spokesperson Zhao Lijian claimed that “on social media, there are forces with ulterior motives that relate this fire with the local response to COVID-19.”

Ho-fung Hung, a sociologist at Johns Hopkins University, told CBS News partner network BBC News that the situation was the first serious test for Xi, who was recently granted another term as China’s leader.

“Over the last two years, Mr. Xi backed himself into a corner by owning the zero-COVID policy. The most rational way for him to handle the situation if protests continue to grow is to pressure local authorities to crack down hard while distancing himself,” Ho-fung said. “But then there is a risk that local authorities might refuse to follow the directive closely as they are worn down by the zero-Covid rigidities.”

Beyond the specific denial over the link between the COVID restrictions and the fire deaths in Xinjiang, it wasn’t immediately clear how China’s central government would react to the protests.