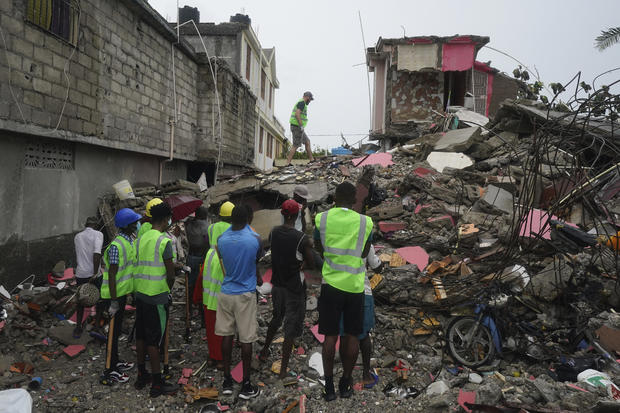 Port-au-Prince, Haiti — The death toll from the weekend earthquake in Haiti jumped to 1,941, with over 9,900 injured, Haitian officials said Tuesday. The news comes as remnants of Tropical Depression Grace battered the country with heavy rain, complicating search and rescue efforts.

CBS News flew by helicopter to the hardest-hit areas because some of the roads were blocked by mudslides. From the air, the destruction is not obvious — it’s only when you get on the ground that the full scope of the destruction becomes clear.

In Les Cayes, one of Haiti’s largest cities, many of the homes and businesses have been destroyed, forcing many to camp out in the open. Nearly 20 miles north, in the village of Maniche, Mayor David Brinard said 98% of the town has been obliterated. He said the most urgent need right now are tents and materials to rebuild homes.

One woman who spoke to CBS News said she lost her home and her sister in the earthquake. She said she is traumatized, doesn’t have anywhere to go and many people in the village are sleeping outside.

The quake and tropical storm have combined with a serious coronavirus outbreak to bring the country’s health infrastructure to its knees. Overwhelmed hospitals in the hardest-hit areas are the ones still standing after Saturday’s monster earthquake. Many others were reduced to rubble, leaving victims scrambling for help anywhere they can find it.

Residents in Maniche said while their needs are urgent, the villages in the surrounding mountains are in dire straits. The roads are completely cut off because of rubble and swollen rivers. They said the only way those villagers can get medical attention is when someone carries the injured by foot, which can take up to two days.