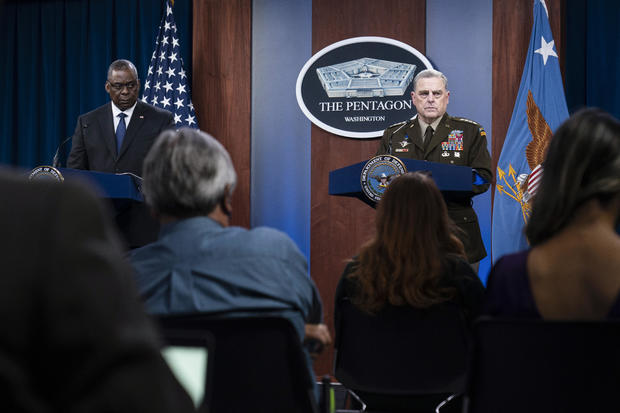 Defense Secretary Lloyd Austin and Chairman of the Joint Chiefs of Staff General Mark Milley briefed reporters at the Pentagon on Friday amid Russia’s military buildup near Ukraine’s border. Austin said “conflict is not inevitable” and that there’s still time for diplomacy.

For the past several months, Russia has been building forces in the western parts of Russia near Ukraine and in Belarus, north of Ukraine. The U.S. along with its NATO allies has called on Russia to deescalate the tensions and warned of consequences if Russia launches another incursion.

There are no plans to send U.S. troops to Ukraine, but the U.S. has put 8,500 U.S. troops from stateside bases on heightened alert to potentially deploy to Eastern Europe. The vast majority of those 8,500 troops would support the NATO Response Force if activated by the alliance.

Pentagon spokesman John Kirby has also said the U.S. troops already in Europe could move within Europe to bolster the Eastern flank of NATO if necessary. Many of the troops who are in Europe on rotational deployments are already on heightened alert to deploy.