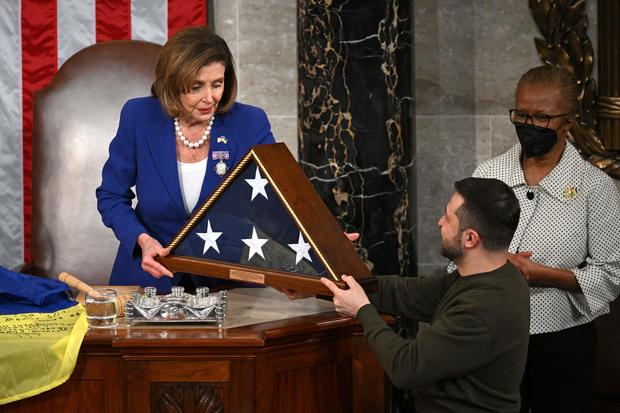 Ukrainian President Volodymyr Zelenskyy urged Congress on Wednesday night to approve more aid for Ukraine, telling lawmakers that “this battle cannot be frozen and postponed,” and  reminding them that temperatures are falling with the arrival of winter.

“Ukraine is alive and kicking,” Zelenskyy said in English to applause. “Russian tyranny has lost control over us,” he added.

Zelenskyy, who delivered his entire address in English, thanked Americans for support and vowed Ukraine “will win because we are united — Ukraine, America and the entire free world.”

“Standing here today, I recall the words of the president Franklin Delano Roosevelt …’The American people in their righteous might will win through absolute victory,'” Zelenskyy said. “The Ukrainian people will win too. Absolutely.”

He noted that many in Ukraine will celebrate Christmas by candle — not because it’s romantic but because Russians have destroyed the power, he said. Millions will have neither heating, nor running water, he said. But they would celebrate nonetheless, he said, adding that millions of Ukrainians want the same thing — victory.

At the end of the speech, he presented a Ukrainian flag signed by Ukrainians to House Speaker Nancy Pelosi and Vice President Kamala Harris.

Zelenskyy’s trip to Washington, his first out of the country since the Russian invasion in February, comes as Congress is debating a massive $1.7 trillion government spending bill, which includes another $45 billion in aid for Ukraine.

Ahead of the speech, Senate Majority Leader Chuck Schumer urged the passage of the bill – which must pass both Houses of Congress and be signed by President Joe Biden by Friday – and said Zelenskyy “made clear that without this aid package, the Ukrainians will be in trouble and could even lose the war.”

“So that makes the urgency of us getting this legislation one all the more important and getting it done quickly without flaw,” Schumer said.

A number of Republicans who oppose more aid attended Zelenskyy’s address — Reps. Lauren Boebert and Matt Gaetz stood but did not applaud for the Ukrainian leader.

In front of Congress, Zelenskyy called for “Ukrainian courage and American resolve” that will “guarantee the future of our common freedom.”

Ahead of the speech, Zelenskyy met with President Joe Biden at the White House. They held a joint press conference, where Mr. Biden said he would continue to support Ukraine “as long as it takes,” and denounced Russian attacks on Ukrainian infrastructure as the brutal winter cold sets in.

“We should be clear about what Russia is doing — it is purposefully attacking Ukraine’s critical infrastructure, destroying the systems that provide heat and light to the Ukrainian people during the coldest, darkest part of the year. Russia is using winter as a weapon,” Mr. Biden said, standing next to Zelenskyy in the White House East Room. “It’s important for the American people and for the world to hear directly from you, Mr. President, about Ukraine’s fight and the need to continue to stand together through 2023.”

Ellis Kim contributed to this report.

Zelenskyy thanked all Americans who have helped their efforts, from the president to everyday citizens who took in Ukrainian refugees.

“Standing here today I recall the words of the president Franklin Delano Roosevelt which has I think so good for this moment — ‘The American people in their righteous might will win through absolute victory.’ The Ukrainian people will win too, Absolutely.”

Zelenskyy presented a Ukrainian flag signed by Ukrainians to Pelosi and Harris.

“We will win because we are united. Ukraine, America, and the entire free world,” Zelenskyy concluded.

Zelenskyy urged Congress to continue in its bicameral — and bipartisan — support of Ukraine.

“It is in your power really to help us bring to justice everyone who started this unprovoked and criminal war,” he said. “Let’s do it.”

Many in Ukraine will celebrate Christmas by candle — not because it’s romantic but because Russians have destroyed the power, he said. Millions will have neither heating, nor running water, he said.

Zelenskyy said Ukrainians will fight for their freedom with “dignity” and “success.”

“We’ll celebrate Christmas. And even if there is no electricity, the light of our faith in ourselves will not be put out,” he said.

Gaetz, Boebert stood for Zelenskyy but did not applaud

There were a number of Republicans who oppose additional aid for Ukraine in attendance, including Reps. Matt Gaetz and Rep. Lauren Boebert. When Zelenskyy entered the chamber to the lengthy standing ovation, Gaetz and Boebert stood but did not appear to applaud.

Zelenskyy compares current situation to Battle of the Bulge

Russians are throwing everything they have against the Ukrainians, just as the Germans did during Christmas 1945, Germans’ last major offensive assault on the western front during World War II. Americans fought back.

“Brave Ukrainian soldiers are doing the same to Putin’s forces this Christmas,” he said. “Ukraine holds its lines and will never surrender.”

The Ukrainian president said he believes next year will be a “turning point” in Russia’s war on Ukraine.

“Next year will be a turning point, I know it, the point when Ukrainian courage and American resolve” bring about freedom, he said.

Zelenskyy recently returned from the front lines. Donbas, he said, still “stands,” despite the Russians’ assault.

Russians are using “everything” they have against Ukrainian cities, and have a significant advantage in artillery and ammunition and missiles and planes.

“But our defense forces stand,” he said.

Russians burn down everything they see, he said.

Zelenskyy, once the applause finally quieted, said, “It’s too much for me. All this for our great people.”

“It’s a great honor for me to be at the U.S. Congress and speak to you and all Americans. Against—against all odds and doom and gloom scenarios … Ukraine is alive and kicking,” Zelenskyy said.

The Ukrainian president expressed confidence for the future, mentioning Ukrainian feats on the battle field.

“The Russian tyranny has lost control over us,” he said.

Top members from the House and Senate escorted Zelenskyy into the House chamber. Zelenskyy was greeted with cheers and applause from members of Congress and the president’s Cabinet.

The Ukrainian president received a standing ovation, with the applause going on for several minutes.

Schumer says Zelenskyy “made clear that without this aid package, the Ukrainians will be in real trouble”

Senate Majority Leader Chuck Schumer addressed reporters ahead of the Zelenskyy’s speech, saying he had just met with Zelenskyy. The Senate is currently debating a  $1.7 trillion government spending bill, which would provide an additional $45 billion for Ukraine aid.

Schumer said he had met with Zelenskyy, and the Ukrainian president “made clear that without this aid package, the Ukrainians will be in trouble and could even lose the war.”

“So that makes the urgency of us getting this legislation one all the more important and getting it done quickly without flaw,” Schumer said.”

Many members wearing blue and yellow

A number of members of the House and Senate are wearing blue and yellow to symbolize the Ukrainian flag, from blue blazers to yellow blouses, scarves and ties.

A few hours before Ukrainian President Volodymyr Zelenskyy headed to Capitol Hill to address Congress, he met with President Biden at the White House. The two leaders presented a united front against Russia and discussed U.S. military aid to Ukraine in a joint press conference. Watch their full remarks in this CBS News Special Report anchored by Major Garrett in Washington.

Pelosi says it is a “profound privilege” to host Zelenskyy

House Speaker Nancy Pelosi and Zelenskyy gave joint remarks on Wednesday. Pelosi said it was with “profound privilege and with great pride” that she welcomed Zelensky.

Pelosi  noted his visit came as Congress prepares to pass “another consequential round of security, economic, and humanitarian assistance.” She praised President Biden’s plan to transfer the Patriot Air Defense System, additional HIMARS, and “other vital military equipment.”

Zelenskyy thanked Pelosi for the invitation to speak to Americans. “I want to give all the messages that I prepared in your language with all the respect to your country for that support that you’ve done for Ukraine,” he said.

He called Congress “a big friend of Ukraine, the Ukrainian people.”