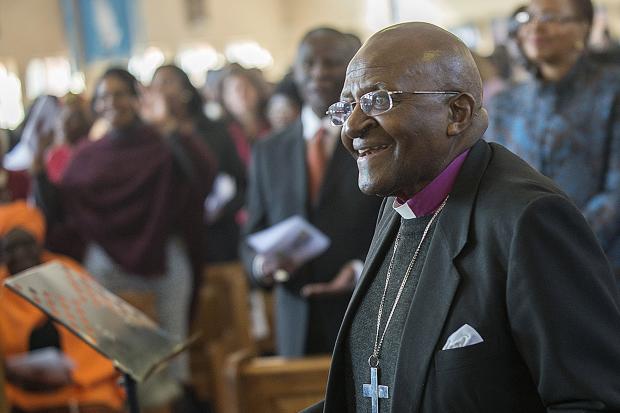 Archbishop Desmond Tutu, the retired South African clergyman who challenged apartheid, won a Nobel Peace Prize and became a global campaigner for human rights, has died. He was 90.

The Desmond Tutu Foundation said in a statement that he passed away in Cape Town on Sunday, one day after Christmas. The foundation called him “a living embodiment of faith in action, speaking boldly against racism, injustice, corruption, and oppression, not just in apartheid South Africa but wherever in the world he saw wrongdoing, especially when it impacted the most vulnerable and voiceless in society.”

Born in the township of Klerksdorp, South Africa, on October 7, 1931, Tutu was a man who always spoke truth to power, whether it was a white racist regime or a corrupt African dictatorship.

As South Africa’s first Black Anglican archbishop, he unhesitatingly used his office to bravely challenge the brutal racism of the country’s apartheid rulers.

“The primary violence — and White people don’t want to hear this — the primary terrorism in this country comes from the government. And until that system goes there is no hope at all of any stability in this land,” he said of South Africa’s racist system of rule.

But he could also turn that righteous fury onto his own supporters. In 1985, Tutu fearlessly broke up an angry South African mob and prevented them from burning a man to death on suspicion of being an apartheid spy.

When the dark days of apartheid finally ended and Tutu’s long-time friend and Nelson Mandela was released from 27 years behind bars, the irrepressible Arch, as he was affectionately known, could not hold back his joy.

“Hey, freedom is coming,” he rejoiced while dancing. “I have never said ‘Viva’ before but I say now ‘Viva!'”

And it was Mandela who, after being elected South Africa’s president, appointed his friend Tutu to lead the country’s Truth and Reconciliation Commission — a body tasked with uncovering the truth about the apartheid government’s brutality.

At times it moved Tutu to tears, but there was a measured consistency in his approach. Like the time he begged Mandela’s former wife Winnie Madikizela-Mandela to apologize for abducting a young boy in 1988 because she believed he was an apartheid spy. The 14-year-old child’s battered body was found many weeks later.

The business of dismantling apartheid was not all doom and gloom. Tutu had a self-deprecating sense of humor.

“One lady said to me, ‘Eh, bishop, if they do this when you come here, can you imagine what is going to happen when Nelson [Mandela] comes!'” he once recounted.

Quick to crack a joke or break out into song and dance, the world is a little darker without him. He leaves behind a foundation committed to human rights but his real legacy is the wonderful tale of how a diminutive pastor with a big laugh became a global conscience for the world.