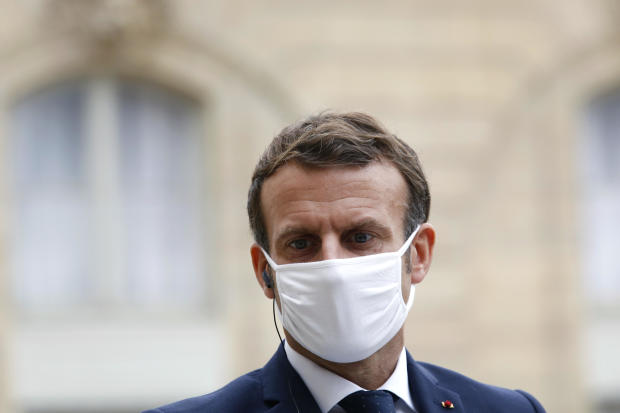 French President Emmanuel Macron has become the latest world leader to catch the coronavirus . His office confirmed on Thursday that he had tested positive for COVID-19 and was self-isolating for seven days in line with national guidelines.

Macron’s diagnosis was confirmed via a RT-PCR test after he showed unspecified early symptoms of the disease. The testing method is a more advanced, more accurate form of the PCR tests used around the world.

The statement said he would continue to carryout his duties while in isolation.

Macron had been due to travel to Lebanon next week, but that trip was cancelled. Other in-person meetings on his agenda have been cancelled, postponed or will now be held via phone or video conference.

French Prime Minister Jean Castex said Thursday that he would also self-isolate as a precaution after coming into contact with the president. Spanish Prime Minister Pedro Sanchez and senior European Union official Charles Michel were also headed into self-isolation after recent meetings with Macron.

EU leader Ursula von der Leyen and the president of Portugal also met Macron within the last week, but it was not immediately clear whether they would isolate.

French newspaper Le Figaro said Macron’s entourage had assured its reporter earlier this week that the president had taken a COVID test several times since the beginning of the pandemic, but hadn’t tested positive.

Macron’s wife Brigitte was a contact case several months ago and self-isolated, but the couple escaped infection at that time. She was also self-isolating again given her husband’s diagnosis, but was not showing any symptoms, French officials said.

U.K. Prime Minister Boris Johnson became the first world leader to confirm a COVID-19 diagnosis in late March, and President Trump caught the virus at the beginning of October. Both Mr. Trump and Johnson were hospitalized for treatment.

Johnson was one of the first leaders, and COVID-19 survivors, to wish Macron a speedy recovery.