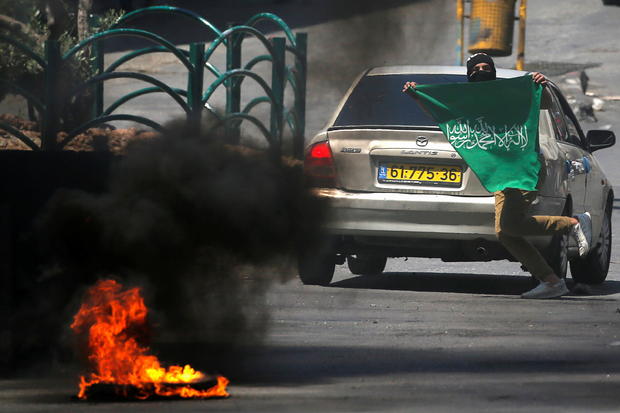 Be’er Sheva, Southern Israel — As the international community ramped up pressure for a ceasefire deal, senior Hamas officials laid out their conditions on Wednesday for a truce with Israel to end the current cycle of bloodshed in the Mideast . But as Israel’s leader stressed that the airstrikes on Gaza would continue until Hamas stops firing rockets, the militant group’s terms seemed unlikely to bring a breakthrough.

Hamas officials confirmed the group’s negotiating position to CBS News on Wednesday, saying it would only stop launching rockets at Israel if two conditions were met, both pertaining to Jerusalem: That Israeli forces and police agree to never again enter the al-Aqsa mosque , as they did earlier this month, and that Palestinians living in the Sheikh Jarrah neighborhood in disputed east Jerusalem not be evicted by Jewish settlers from homes their families have lived in since the 1950s.

Israel’s military would not comment on any plans for a ceasefire on Wednesday, but Israeli Prime Minister Benjamin Netanyahu made it clear that his military’s work was not over.

“With every passing day we are striking at more of the terrorist organizations’ capabilities, targeting more senior commanders, toppling more terrorist buildings and hitting more weaponry stockpiles,” he said, before adding that he was “determined to continue this operation until its objective is achieved: to restore quiet and security to you, citizens of Israel.”

Netanyahu also thanked Israel’s allies, and the U.S. in particular, for supporting the country’s right to self-defense.

But Washington also appeared to be ratcheting up the pressure on Israel, with President Biden telling Netanyahu in a phone call on Wednesday morning that he “expected a significant de-escalation today on the path to a ceasefire,” according to a description of the call from the White House.

The United Nations Security Council has been blocked by the United States thus far from issuing a unanimous statement calling for an immediate ceasefire, as the U.N. Secretary-General has done personally.

On Wednesday, Security Council member France said it would propose a new resolution, along with Israel’s neighbors Jordan and Egypt, calling for a ceasefire and a renewed push for a two-state solution — the establishment of an independent state of Palestine alongside Israel — to address the underlying cause of conflict.

Israel’s Ambassador to the U.S. and U.N. Gilad Erdan said the U.N. should “condemn strongly the launching of missiles and rockets at our civilians and they should back Israel’s efforts to degrade and dismantle the Hamas terror machine,” but he told CBS News’ Pamela Falk, “unfortunately, as we know, this is not what will happen.”

Meanwhile, Palestinians in Israel and the occupied West Bank have taken to the streets in the biggest protests seen in years to denounce the Israel for its military assault on the densely-populated Gaza Strip.

Many Palestinian businesses remained closed on Tuesday as an organized strike coincided with the so-called “day of rage” protests . Four protesters were shot and killed during clashes with Israeli forces.

“We are trying to give one message that we are one people, one country, one land for the whole Palestinians,” protester Maisoon Ali, 55, told CBS News at a demonstration in Ramallah, in the West Bank.

But the violence showed no signs of yielding. In the southern Israeli city of Be’er Sheva, near Gaza, alarms sounded again on Wednesday to warn of a new salvo of rockets incoming from the tiny Palestinian enclave.

“We’ve lived here a long time. We’re used to this kind of trouble. Civilians here in Israel need to do what they do best: protect themselves and let [the Israeli military] win.”

One of the big questions that remained unanswered on Wednesday was what the Israeli government would deem a win.