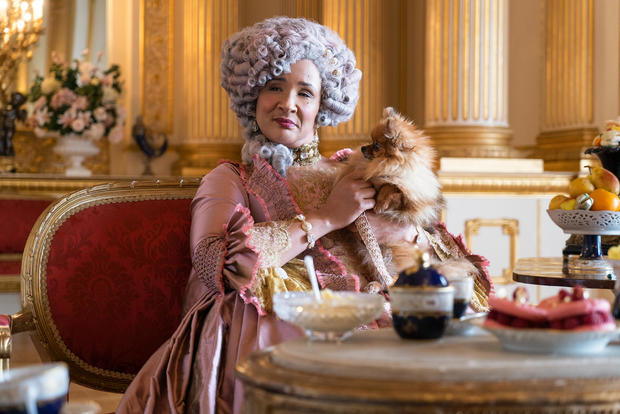 How “Bridgerton” hints at the “complete story” of Black Britain

As we celebrate Black History Month , we’re looking at how the hit Netflix show “Bridgerton” is changing our understanding of the past. The Shonda Rhimes-produced period drama is the most-watched Netflix series ever. It re-imagines 18th century England as a time when relationships between races are not forbidden, and a place where people of color are front and center.

The show has drawn criticism for its diverse casting, but CBS News correspondent Imtiaz Tyab has discovered that Britain’s upper classes do have a very real multiracial history.

Record-breaking, boundary-pushing, and oh so sexy, “Bridgerton” sizzles in a way few period dramas do. But make no mistake, the Regency-era romance — with its multiracial cast — isn’t merely an act of color-blind casting. The series is addressing the issue of race head-on.

The English monarch in the drama is the very real King George III, who married Queen Charlotte in 1761, a German aristocrat whose racially ambiguous features have long divided historians over possible African roots.

“This is all part of the story of England… all kinds of races and cultures have arrived here, and I think it’s just, it’s a very important part of that narrative,” said Anna Eavis, English Heritage’s curatorial director.

But in Bridgerton, Queen Charlotte is resplendent in silks and towering wigs, and she is unmistakably Black. The pivotal role is portrayed by classically trained British-Guyanese actress Golda Rosheuvel.

“For the first time, I was allowed to be in a story,” Rosheuvel told CBS News’ Imtiaz Tyab. “Do you know what I mean? I felt seen in a story… that had never happened to me before.”

So what does she say to critics who complain that it’s disingenuous for people of color to be depicted in period dramas as peers to their white contemporaries?

“There is a reality, I think, in my opinion, as you say, where other people existed, other peoples’ stories were going on at the same time. That’s why I kind of look on Downton Abbey, all of that, I mean, in a positive light,” she said. “Because I take from their exclusion a positive journey to inclusion.”

Downton Abbey was by no means the first period drama to leave Black and Brown people largely out of its storylines, but it is perhaps the most famous.

The show’s creator, Julian Fellowes, says the reason he casts mostly-white productions is because, “you can’t make something untruthful.”

But artist Hannah Uzor says that’s an argument that rests on a falsehood. For years she’s been researching the lives of historical Black British figures in the upper classes and, with her paintbrush, brings them to life in vivid portraits.

“There’s still a lot of racial inequality, and having to highlight those stories just helps people to understand why we’re here in a sense,” Uzor told CBS News. “We are not others, or we haven’t just arrived — we’ve been here with the very fabric of this society.”

Uzor’s most celebrated painting is of Sarah Forbes Bonetta, Queen Victoria’s African goddaughter, who was born in 1843 in a region which, today, is Nigeria and Benin. She spent part of her childhood in England under the monarch’s care.

“I think Sarah’s story is very important, because it helps to bring about a part of our history that we don’t want to look at, how we represent Black people in history, and also how we bring the story — the complete story — of our history, the good, the bad and the ugly, and talk about it,” Uzor said. “I think Sarah helps us to question some of our own prejudices.”

Rosheuvel told CBS News that prejudice is something that she’s faced far too often as a Black actress. Before Bridgerton, she said she frequently felt as though she’d been pushed into a professional abyss.

“I remember a time in my career where, you know, I had to change my perspective on my own career … I was frustrated, and I wasn’t seeing, you know, a queen, a Black queen, and a Black duke, kind of, you know, a Lady Danbury,” she said. “I had to kind of really search in myself for my own self-worth.”

It wasn’t easy, and she was out of work for a period, “but you know, I come from quite a strong stock, and just the persevering, the persevering and believing in myself … I come from a family that never — I never heard, ‘Oh you can’t do that because of the way you look.’ Everything was possible for me.”

She just needed the world to catch up.