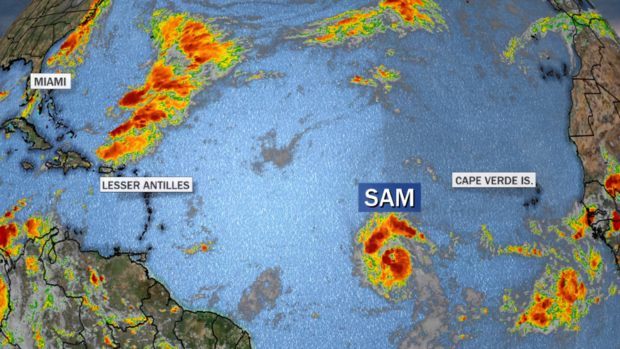 The hyperactive hurricane season of 2021 continues with Hurricane Sam, which is expected to rapidly intensify into a Category 4 hurricane in just two days. Sam is just the latest hurricane adding to the overabundance of storms that have rapidly intensified in the 2020 and 2021 seasons .

The majority of computer model guidance keeps Sam far out to sea. However, some model runs have been showing a westward track towards the Caribbean. If that materialized, it could put the U.S. in jeopardy.

While a U.S. landfall cannot be ruled out down the road, the system is about 2,500 miles from the nearest point on the U.S. mainland and it is not moving fast, so we have plenty of time to monitor it.

The system is a potential threat to Bermuda by late next week. And after it passes Bermuda, the track becomes a lot more uncertain, with some hints there could be a jog closer to the northeastern U.S. by next weekend.

As of Friday afternoon, Sam is a low-end hurricane with winds of 75 mph, located 1,600 miles to the east-southeast of Puerto Rico. It is moving west in the general direction of the Leeward Islands.

But over the weekend it will begin a turn towards the northwest, which makes it more likely that Sam will miss the northern Lesser Antilles, staying out over the open water.

As it moves in that direction, Sam will get stronger. This is because water temperatures get warmer along its path, and also because the system’s structure will become better organized and thus be able to more efficiently convert the Atlantic Ocean’s heat energy into fuel to power its intensity.

Sam has already met the criteria for rapid intensification: a wind increase of 35 mph in 24 hours. It may do that again over the next 48 hours.

Sam is the 16th storm to rapidly intensify over the past two seasons in the Atlantic — a shockingly high number — but then again we have had an abnormally large number of storms in 2020 and 2021. The average number of storms which rapidly intensify per season is about four (according to Phil Klotzbach from Colorado State University), so the last two years combined have seen about double the typical number.

Hurricane researcher Jim Kossin, a senior scientist with The Climate Service , told CBS News in an email conversation that the number of storms rapidly intensifying lately is indeed abnormal and there may still be more to come this season.

While there are many factors that may explain why so many systems are rapidly intensifying as of late, one reason is likely a rise in ocean heat due to climate change . Since the 1980s, rapid intensification has increased by 4 to 5 mph per decade. A 2019 paper found that human-caused climate change has been contributing to this trend in the Atlantic basin — a trend that is likely to continue as long as oceans keep heating.

“The increase in rapid intensification events in the Atlantic is very likely due to the warmer than normal ocean temperatures, which certainly have a human fingerprint on them. The latest research, and the latest IPCC report says that rapid intensification events are increasing in frequency and intensity and we have medium confidence that this increase can not be explained by natural variability alone,” Kossin explained.

Storms that rapidly intensify have an 80% chance of becoming a major hurricane (Category 3 and up), which Sam is forecast to do in short order.

In one respect a stronger system early on is a good thing. That’s because systems that get strong have a greater tendency to recurve out to sea rather than keep moving westward towards the Caribbean.

Weak systems tend to ride the prevailing easterly wind flow (from east to west). But stronger systems, with deep convection (taller clouds), tend to tap into upper level winds, which this time of year start to blow more in the west-to-east direction as the season changes from summer to fall.

Right now the Atlantic hurricane season is right on the cusp of this pattern change, and that has made this forecast track a little tricky. But the trends in the models the past couple of days suggests that fall’s uptick in westerly wind flow will win this battle — at least in the short term.

The long-term track of Hurricane Sam is still in question and it’s way too early to speculate. It is likely the storm will get pulled north near Bermuda towards the end of next week —— but what happens after that is up in the air.

What seems clear — at least, as clear as it can be 7 days out — is that a large cut-off storm will develop near the U.S. East Coast. Depending on the orientation, Sam may be catapulted north into the open Atlantic or possibly pulled westward towards the northeastern U.S. and Canadian coasts.

Stay tuned to Sam, as the forecast is bound to change.

Jeff Berardelli is a meteorologist and climate specialist for CBS News.