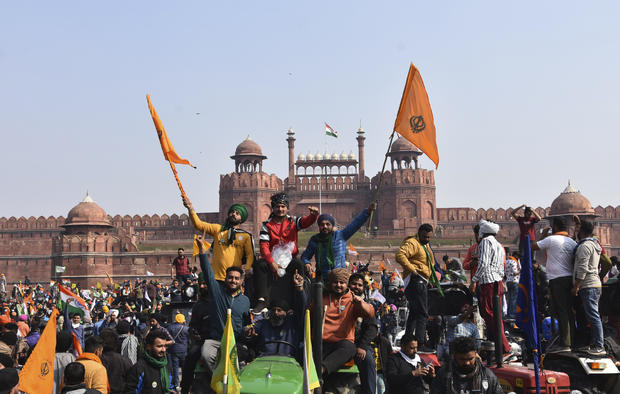 New Delhi — Indian journalist Barkha Dutt is speaking out against intimidation and death threats she and other journalists have faced while reporting on the months-long protests by farmers — one of the biggest crises being faced by the country’s prime minister, Narendra Modi.

The death threats “represent a larger environment of media intimidation that’s a very real part of our lives as functioning journalists in India today,” Dutt said on CBSN.

Dutt and eight other journalists were accused of being part of an “anti-India conspiracy” in a YouTube video that also called for their “hanging.” The online platform took down the video last month, but not before it had reached half a million viewers.

Dutt, the founder of Mojo Story, said it was a “struggle” to get the video taken offline from multiple platforms and it still pops up in online searches.

“What’s worse is that four political leaders who are affiliated with the ruling party, the BJP, actually supported the video. And that’s when we understood that this cannot be taken lightly and it cannot be ignored,” she said.

The Indian police have not taken action against the content creator who posted the death threat video, which was also debunked by a fact-checking platform as “riddled with misleading claims.”

Last year, 67 Indian journalists were arrested, detained, or questioned by authorities while on the job. India has slipped two places on the World Press Freedom Index: it ranked 142 in 2020, down from 140 the previous year.

This year, five journalists were arrested by the Indian police — the highest of any year in the past three decades. Several journalists faced sedition and other criminal cases for reporting on the protests by farmers , especially after they turned violent on January 26, India’s Republic Day.

“We are a very functional, argumentative democracy, we have a very strong history of elections and peaceful transfer of power, so it doesn’t look like, as if our freedoms are diminishing. What happens between elections sometimes tells a lot about the health of our democracy. And what we find increasingly as journalists is that if you hold power to account, it’s a kind of diminishing space for that,” Dutt said.

Last month, the Indian police also arrested environmental activist Disha Ravi after helping Greta Thunberg with an online “toolkit” that suggested ways to help the protesting farmers. Ravi was charged with sedition and conspiracy to incite violence and police called her a “key conspirator” behind the document. She posted bail after spending 10 days in jail.

Thunberg and singer Rihanna were among dozens of celebrities who spoke in favor of the protesters, who have been demonstrating against Modi’s agricultural reforms for more than three months.

“There are many different ways of silencing people and among them are basically getting journalists drawn into a vortex of cases,” Dutt said.

“Something is happening here. Basically, what that something is is telling journalists: fall in line, otherwise we will harass you, and we will constantly make you look over your shoulder before you criticize us the next time.”