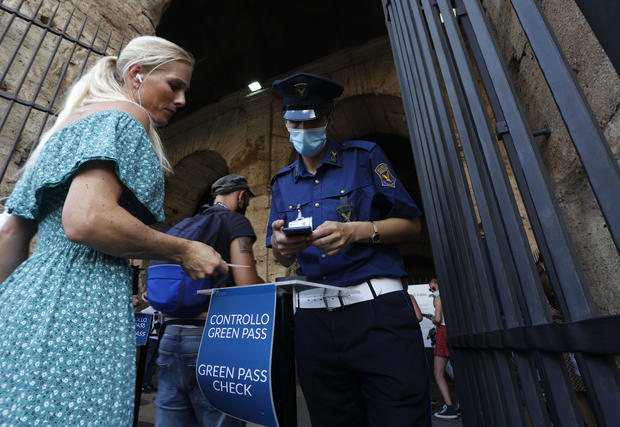 Italy launched strict new COVID restrictions on Friday, requiring proof of vaccination for anyone who wants to go inside a bar, restaurant, or tourist site. The so-called “Green Pass” is an attempt to fight the surge in coronavirus cases.

The government announced the rule on July 22, and about 50 million of its 60 million residents had downloaded the pass by late July, the Associated Press reported. The rule applies to those 12 or older – because children under 12 aren’t eligible to receive a COVID vaccine in Italy.

Brad Carlson, who visited Italy just before the new rules took effect without getting vaccinated, wouldn’t be able to get into most places. If he got tested, a negative result from the past 48 hours would also do the trick.

Vaccine certificates issued by the U.S., Canada, Japan and Israel will be accepted for tourists arriving from those countries, the AP reported.

“I think it is a good idea because it makes the people who have been vaccinated feel a little safer,” another U.S. tourist said.

Some Italians have taken to the streets, calling the “Green Pass” a violation of civil liberties. But for the vast majority, it’s a way to ensure Italy — once the epicenter of the pandemic – never returns to the hell of last year when they ran out of space to bury the dead.

Vaccination rates have tripled in some regions, shortly after the new rules were rolled out. After a slow start in Europe, more people are now getting vaccinated in the European Union than in the U.S.