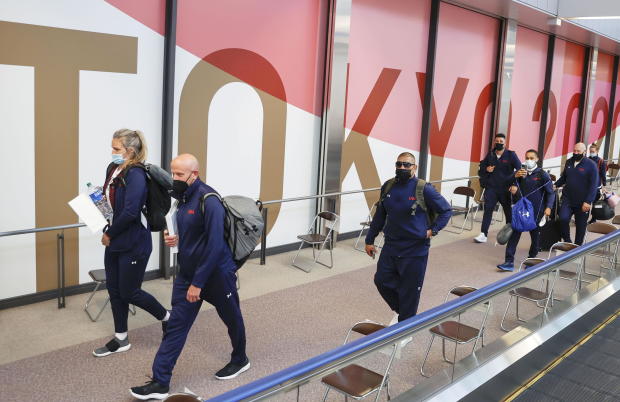 Tokyo — The island nation of Samoa has withdrawn its weightlifting team from the Summer Olympics , citing Japan’s rising rate of coronavirus infections. Vaccinations are accelerating, but so too are the number of daily COVID-19 cases, especially in the capital Tokyo, which is set to host the Summer Olympics in just over three weeks.

Tokyo and neighboring regions are still under a “quasi-lockdown,” with bars and eateries asked — but not ordered — to stop serving alcoholic beverages by 7 p.m. A decision on whether to lift the remaining restrictions is expected before the current quasi-state of emergency order expires on July 11.

As for the Games, Japanese and Olympics officials have announced that a limited number of domestic fans will be permitted to attend the events, but foreign fans are banned.

After younger Japanese crowded back into bars and restaurants over the last month, cases rebounded sharply this week, increasing the likelihood that Tokyo will remain under lockdown restrictions during the Olympics — and piling yet more pressure on authorities to change their current plans and hold the Games without any spectators at all.

If the state of emergency in Tokyo is not lifted on July 11, the current plan to allow a maximum of 10,000 Japanese spectators at Olympic events would be reduced by half, and the government could go further.

“I have clearly stated that having no spectators is a possibility,” Prime Minister Yoshihide Suga told journalists on Thursday.

With the Olympics opening ceremony looming nearer, Japan has shifted its vaccination drive into overdrive, and local districts like the Sumida Ward in northeast Tokyo are at the forefront of the push.

With more than 70% of its senior citizens at least partially vaccinated — well ahead of the national average of 60% — Sumida Ward started offering shots to those as young as 40 this week.

“It’s much faster than I thought it would be,” one resident said. “I was surprised at how smooth the process was.”

But nationally, demand for vaccinations has far outstripped supply, with some areas forced to scale back their inoculation efforts. The government is still aiming to get at least most of the country’s seniors fully vaccinated by the end of July, and officials say the rate of COVID-19 cases resulting in serious illness has already started to decline.

Outside Tokyo, in the city of Yokohama, antiviral measures reduced the Olympic “torch relay” to a series of photo-ops for the media and a handful of lucky fans. Next week the torch relay is set to make its final approach, through Tokyo, but city officials have already announced it won’t be held on public roads.