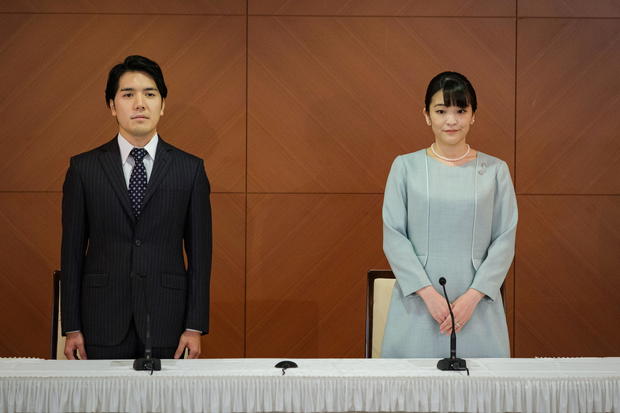 Tokyo — In what was called the most anticipated live TV appearance of the year, 30-year-old Princess Mako defended her controversial decision to marry a man some here branded unworthy of her status. Mako’s decision had drawn widespread sympathy, as well as outrage from a small but noisy band of hardcore traditionalists.

Still suffering from stress-related illness amid the firestorm of criticism of the marriage, she said it was “a necessary choice.”

Rules of the Imperial House — the Japanese equivalent of Buckingham Place — dictate that when female royals get married — nowadays, always to a commoner — they lose their imperial status, an event that in normal times generates about as much buzz as the leaves changing color on the grounds of the Imperial Palace.

But back in 2017, when Mako announced her engagement, what should have been just another Imperial Household press release unexpectedly became tabloid catnip, when Japan’s gossip magazines managed to turn up a spurned suitor — not of the young man himself, but of his mother, who was entangled in a financial dispute with her ex-boyfriend.

The Komuro family’s less-than-squeaky-clean image, compounded by the dislocations of the pandemic , forced Mako to put her nuptials on hold for four years.

The couple said Tuesday that the dispute was in the process of being resolved.

It was all too much for Ken Ruoff, a historian who directs the center for Japanese Studies at Portland State University and has written a history of the modern Japanese monarchy . He called the national handwringing over Mako’s marriage “bizarre” and reckons it’s driven mostly by events well beyond the walls of the palace.

“There is a lot of angst among Japanese about the pandemic, about growing economic inequality, about the fact that the economy has been largely stagnant, about the rise of China,” he told CBS News in an online interview. “And very sadly, they’re turning this anger tragically against … this young couple.”

With their marriage registered earlier Tuesday local time, Ruoff noted, Mako is now officially a private citizen. “So what business is it of 126 million Japanese to render judgment on this young lady’s choice of a spouse?” he asked.

In 1993, Mako’s grandmother, the retired empress Michiko, collapsed and temporarily lost her ability to speak after a spate of negative reports in the gossip press. The current empress, Masako, a Harvard-educated, multilingual former diplomat, retreated from public life for over a decade, stricken by mental illness believed to be brought on by pressure to produce a male heir — while the sole supplier of Y chromosomes, her husband, the crown prince Naruhito, seemed to escape blame.

Targeted online over her romantic choice, Mako became the latest sufferer, diagnosed with complex post-traumatic stress disorder. To end-run carping about her choice of a spouse, she opted to forgo a wedding ceremony and the customary $1.3 million paid to departing royals.

The couple’s plans to live in the U.S. has invited comparisons to Britain’s Prince Harry and his wife Meghan Markle, who abandoned Windsor Castle to live in California.

Mako and Komuro are headed for New York, where he earned a degree at Fordham Law School and will get the results of his bar exam.

But while both couples seek refuge from the tabloids far from home, any similarities end there. Unlike Harry and Meghan, Ruoff said, Mako’s demure and highly stage-managed upbringing make, say, an Oprah interview or Netflix deal unlikely. “More likely, what is going to happen is she’s going to disappear and she’s going to purposefully just disappear.”

Mako’s departure from the Imperial Household leaves just 17 members, including the retired former emperor and empress. Most are female.

Mako’s brother Hisahito, 15, is the only next-generation heir to the throne left, since ultraconservatives have prevented allowing females to ascend to the throne, insisting Japan’s identity and very existence depends on an “unbroken” male bloodline even as the ranks of the royal family grow ever more dangerously thin.