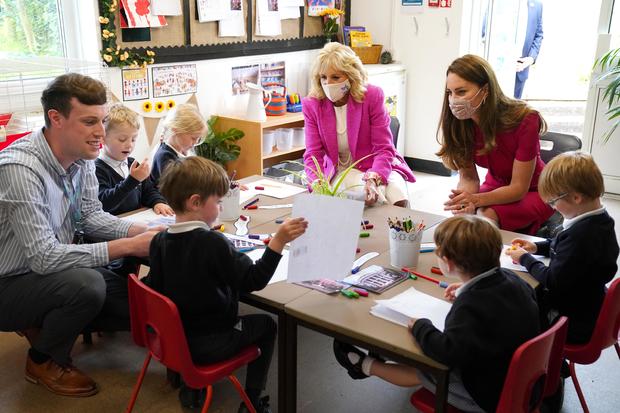 First lady Jill Biden met Catherine, the Duchess of Cambridge, for the first time on Friday in Cornwall, England, where world leaders have arrived this week for the G7 Summit , which begins Friday. It’s the Bidens first trip abroad since President Joe Biden was inaugurated.

While wearing masks, the first lady and the duchess toured Conor Downs Academy, meeting with 4-and-5-year-old students as well as teachers. The academy is a “trauma-informed school,” meaning it works with students who have experienced trauma in their lives.

The first lady said the children were “so well behaved.”

At the Cornwall school, the pair participated in a roundtable discussion on the importance of early childhood education, a topic close to both women’s hearts .

“The importance of providing adequate support for parents and children alike during early childhood, and the positive impact that this can have across society, is something which Her Royal Highness and The First Lady have both gained an understanding of through their respective work,” Kensington Palace said in a press release.

The palace said that the duchess will step up her work in this area with an announcement next week.

While touring the “outside classroom,” the two met the school’s five bunnies, which the students help care for. The first lady carried a bowl of carrots to feed them.

Speaking on the impact of education early on in life, the first lady said, “It’s very important to the foundation. As a teacher at the upper levels, if they don’t have a good foundation, they fall so far behind. This is amazing to see how far advanced they are.”

Answering a question about her newborn niece Lilibet, the daughter of Prince Harry and Meghan, Duchess of Sussex, after the discussion, Kate responded, “I wish her all the very best. I can’t wait to meet her because we haven’t yet, met her yet, so hopefully, that will be soon.”

Asked if she has FaceTimed Lilibet, she responded that she has not.

After the roundtable discussion, the first lady joked that it was too short.

“I have a million questions written down! I’ll have to give you a call!” she said.

Before leaving, the women were presented with small bouquets of flowers from the children.

The Bidens arrived in the UK on Wednesday, participating in discussions with many world leaders face-to-face for the first time since the pandemic began. On Thursday, Mr. Biden met with British Prime Minister Boris Johnson “to affirm the enduring strength of the special relationship between the United States and the United Kingdom,” White House Press Secretary Jen Psaki said.

The president and the first lady will meet with Queen Elizabeth II at Windsor Castle on Sunday. After the meeting, Dr. Biden will return to the U.S.

The president will then travel to Brussels for a NATO Summit on June 14, as well as a U.S.-European Union Summit. On June 16, he will meet with Russian President Vladimir Putin in Geneva, Switzerland.