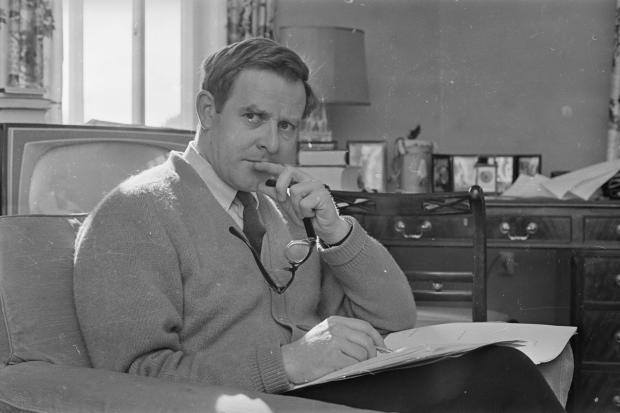 John le Carré, the spy who became an author whose novels defined the Cold War era, has died, his publisher said in a statement on Sunday. He was 89.

The cause of death was pneumonia, publisher Curtis Brown CEO Johnny Geller said in a statement. Le Carré, whose real name was David Cornwell, is survived by his wife of almost 50 years and his four sons.

“His like will never be seen again, and his loss will be felt by every book lover, everyone interested in the human condition,” Geller said in a statement. “We have lost a great figure of English literature, a man of great wit, kindness, humor and intelligence. I have lost a friend, a mentor and an inspiration.”

Le Carré told CBS News’ Mark Phillips in 1996, “Joseph Conrad wrote about the sea because he was born to the sea. I was recruited very early into the secret world. I would copy Conrad in that request; the secret world was my natural element, I was in it for those years and I understand its workings as he understands the sea.”

Le Carré’s debut novel, “Call for the Dead,” introduced the world to George Smiley, the bespectacled, unhappy but relentless civil servant who was a sort of anti-James Bond. Smiley appeared in nine of le Carré’s books, including as a side character in his third book and first best seller, “The Spy Who Came In from the Cold,” and in his last book, “A Legacy of Spies.”

Le Carré told Steve Kroft of “60 Minutes” in 2018 that “these characters never left me.”

“In some curious way, particularly Smiley, they became —  even if I wasn’t writing about them —  they became quite conscious companions at times in my imagination,” le Carré said. “And what I wanted to do at this stage, this point of closure in the Smiley saga now 50, 60 years on, was have the present interrogate the past about what we did then in the Cold War in the name of freedom. And was it worth it. And it was with this very mood very much that I concluded the book and the search for George Smiley, which for me was some kind of search for truth.”

Le Carré refused to have his name put in for any literary awards and refused to accept knighthood. He told Kroft he was “suspicious of the literary world that I don’t want its accolades.” And he said being a Commander of the British Empire is what he wanted “least of all.”

“I don’t want to posture as somebody who’s been honored by the state and must therefore somehow conform with the state,” le Carré said. “And I don’t want to wear the armor.”

Le Carré was 5 years old when his mother, Olive, abandoned the family. He and his brother were left under the care of their father, Ronnie, a con man. Le Carré said his father had a “wonderful brain,” but “if there was a bent way of doing something, he took it.”

Le Carré was an excellent student, and he graduated from Oxford with a degree in Modern Languages. A career as a spy seemed like a natural fit for him.

“When it comes to recruiting people for the secret world, what the recruiters are looking for is pretty much what I had,” le Carré said. “I was unanchored, looking for an institution to look after me. I had a bit of larceny. I understood larceny. I understood the natural criminality in people — because it was — it was all around me. And I have no doubt there was a chunk of it inside me too. Once I found that identity, it took root in me. It exactly — it gelled with the world that I’d known in the past.”

He stared out working in Germany for MI6, the famed British intelligence agency, posing as a young diplomat as the Berlin Wall was going up.

He eventually began writing novels during his commute and lunchtime.

“My memory is that I wrote it very fast, the story,” le Carré said. “But I had no idea where I was going at first. And it just flowed. And I think you get a break like that once in your writing life. I really believe — nothing else came to me so naturally, so fast.”

His third book, “The Spy Who Came In from the Cold,” would become his breakout novel and was the literary event of 1963. Since he had written under a pseudonym, the only people who knew who the author was were British intelligence, and they did not want to blow his cover in Germany. When he was finally outed as the author, MI6 gave him permission to leave, allowing him to focus on writing full-time.

Le Carré’s novels focused on what he called the “Secret Intelligence Service,” or the “Circus,” and were the perfect window into the secret life of espionage during the height of the Cold War. 1974’s “Tinker, Tailor, Soldier, Spy” was loosely based on the hunt for real-life spy Kim Philby, who gave hundreds of secret documents to the Soviet Union.

But even as the Cold War dragged on in the 1980s, le Carré’s writing did not suffer from listlessness. Philip Roth described his 1986 novel “A Perfect Spy” as “the best English novel since the war.”

His runaway success as a novelist translated into movie and TV adaptations, with “The Night Manager” and being turned into BBC series and “The Spy Who Came In from the Cold” becoming a movie in 1965. Actors who have portrayed George Smiley include Rupert Davies, Alec Guinness and Gary Oldman.

After the Cold War ended, le Carré turned his attention to the pharmaceutical industry, the Arab-Israeli conflict and eventually, Brexit. He told Mark Phillips of “CBS Sunday Morning ” in 2019 that although the Cold War had ended, it’s “the same game but played for different purposes and by different rules.”

“Well, let me just say, first of all, that always in my books, I’ve tried to live the passion of my time,” le Carré said. “And in this case, I felt very deeply — I continue to feel very deeply — that the British public is being bamboozled by people with private interests. So, to get that feeling, to invest the argument in characters rather than just stand on a soap box, that was my job.”