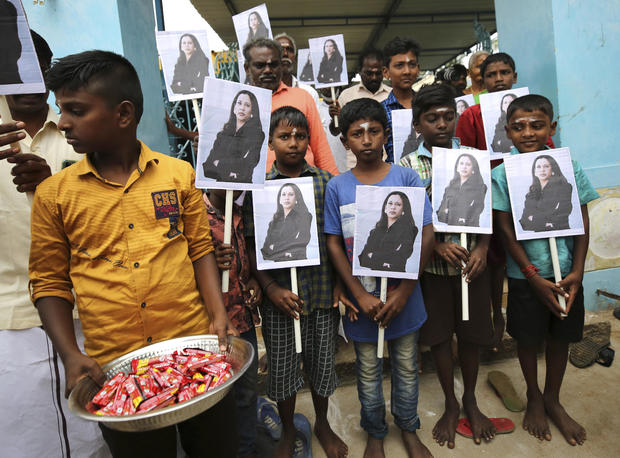 New Delhi — None of Kamala Harris’ relatives still live in her ancestral village in southern India, but that didn’t dampen the festive mood there on Wednesday as she prepared to take the oath as the first South Asian Vice President of the United States. Harris will also be the first woman to hold the office, and the first Black American Vice President — her father was born in Jamaica.

Thulasendrapuram is a small, lush green village in India’s Tamil Nadu state, about 190 miles south of Chennai — one of India’s four big metropolises. It’s the village where Harris’ maternal grandfather, P. V. Gopalan, lived for a long time before moving to Chennai, where Shyamala Gopalan, Harris’ mother was born in 1938.

Decades later, Harris’ mother moved to the U.S. to become a biomedical scientist. It was in the U.S. that Gopalan met her husband-to be, Donald Harris, a respected economist.

Harris visited Thulasendrapuram when she was just five years old, and has recalled walks with her grandfather on the beach at Chennai.

Given the 11-and-a-half-hour time difference between Washington Thulasendrapuram, villagers will have kicked off their celebrations on Wednesday long before Harris started preparing for her swearing-in ceremony.

“Today all the people in the village are very happy as our Kamala di is all set to become the Vice President of the United States,” resident Sivaranjani was quoted as telling Indian news agency ANI as she made murukku. “We all are very excited. She has surely inspired many women in the village.”

Several of the children in the village, which has a population of only a few hundred, carried around placards bearing photos of Harris. There was also a large billboard in the village congratulating her.

“For the next four years, if she supports India, she will be the president,” G. Manikandan told the AFP news agency. His shop displays a wall calendar featuring pictures of Harris and President-elect Joe Biden.

The village marked the Biden-Harris election victory in November with a similar celebration .