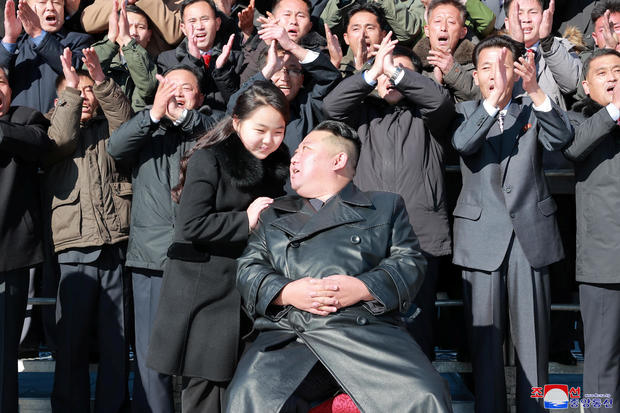 North Korean leader Kim Jong Un’s daughter made a public appearance again, this time with missile scientists and more honorific titles as her father’s “most beloved” or “precious” child. She’s only about 10, but her new, bold photos are deepening the debate over whether she’s being primed as a successor.

The daughter, believed to be Kim’s second child named Ju Ae and about 9 or 10 years old, was first unveiled to the outside world last weekend in state media photos showing her observing the North’s intercontinental ballistic missile launch the previous day with her parents and other older officials. The daughter wearing a white puffy coat and red shoes was shown walking hand-in-hand with Kim past a huge missile loaded on a launch truck and watching a soaring weapon.

On Sunday, the North’s official Korean Central News Agency mentioned her for the second time, saying she and Kim took group photos with scientists, officials and others involved in what it called the test-launch of its Hwasong-17 ICBM.

KCNA described her as Kim’s “most beloved” or “precious” child, a more honorific title than her previous description of “(Kim’s) beloved” child on its Nov. 19 dispatch. State media-released photos showed the daughter in a long, black coat holding her father’s arm as the two posed for a photo. Taking after her mother Ri Sol Ju, who wasn’t visible in any of the photos Sunday, she had a more mature appearance than in her unveiling a week ago.

Some photos showed the pair standing in the middle of a line of uniformed soldiers before a massive missile atop a launch truck. Others showed Kim’s daughter clapping her hands, exchanging handshakes with a soldier or talking to her father as people cheered in the background.

“This is certainly striking. The photograph of Kim Ju Ae standing alongside her father while being celebrated by technicians and scientists involved in the latest ICBM launch would support the idea that this is the start of her being positioned as a potential successor,” said Ankit Panda, an expert with the Carnegie Endowment for International Peace.

“State media underscoring her father’s love for her further underscores this, I think. Finally, both of her initial public appearances have been in the context of strategic nuclear weapons — the crown jewels of North Korea’s national defense capabilities. That doesn’t strike me as coincidental,” Panda said.

After her first public appearance, South Korea’s spy service told lawmakers that it assessed the girl pictured is Kim’s second child, who is about 10 and whose name is Ju Ae. The National Intelligence Service said her looks matched information that she is taller and bigger than other girls of the same age. It also said that her unveiling appeared to reflect Kim’s resolve to protect the security of North Korea’s future generations in the face of a standoff with the United States.

South Korean media previously speculated Kim has three children — born in 2010, 2013 and 2017 — and that the first child is a son while the third is a daughter. The unveiled daughter is highly likely the child who retired NBA star Dennis Rodman saw during his 2013 trip to Pyongyang. After that visit, Rodman told the British newspaper The Guardian that he and Kim had a “relaxing time by the sea” with the leader’s family and that he held Kim’s baby daughter, named Ju Ae.

North Korea has made no mention of Kim’s reported two other children. But speculation that his eldest child is a son has led some experts to question how a daughter can be Kim’s successor given the deeply male-dominated, patriarchal nature of North Korean society. Kim is a third-generation member of the family that has run North Korea for more than seven decades, and his father and grandfather successively governed the country before he inherited power in late 2011.

“We’ve been told that Kim has three children, including possibly a son. If this is true, and if we assume that the male child — who has yet to be revealed — will be the heir, is Ju Ae truly Kim’s most ‘precious,’ from a succession standpoint?” said Soo Kim, a security analyst at the California-based RAND Corporation. “I think it is too early to draw any conclusions.”

She said that Kim Jong Un may think his daughter’s unveiling is an effective distraction while conditioning Washington, Seoul and others to living with the North Korean nuclear threat as “the spectacle of Ju Ae appears to eclipse the intensifying gravity of North Korea’s nuclear and missile threat.” She added that by parading his daughter around, Kim Jong Un may also want to tell his people that nuclear weapons are the sole guarantor for the country’s future.

In comments published by state media Sunday, Kim called the Hwasong-17 “the world’s strongest strategic weapon” and said his country’s ultimate goal is possessing “the world’s most powerful strategic force.”

Experts say the Hwasong-17 is North Korea’s longest-range missile — designed to strike the mainland U.S. — but is still under development. Its launch was part of a barrage of missile tests that North Korea says were meant to issue a warning over U.S.-South Korean military drills that it views as an invasion rehearsal.

“Kim may be signaling to other North Korean elites that he is mentoring his daughter for a role in the leadership,” said Leif-Eric Easley, a professor at Ewha University in Seoul.

“Giving her such an early and public start is unusual but reflects the historical and political significance Kim attaches to a nuclear missile that can reach the United States,” he added.

Analyst Cheong Seong-Chang at the private Sejong Institute in South Korea said that Kim Jong Un cannot make his son his successor if he thinks he lacks leadership. Cheong said Kim may be preventing potential pushback for choosing a daughter as a fourth-generation leader, so he likely brought her to a successful ICBM launch event to help public loyalty toward him be carried on smoothly to his daughter.

“When a king has many children, it’s natural for him to make his most beloved child as his successor,” Cheong said. “Kim Ju Ae is expected to appear occasionally at Kim Jong Un’s public events and take a succession training.”

Revealing the young Ju Ae came as a huge surprise to foreign experts, as Kim Jong Un and his father Kim Jong Il were both first mentioned in state media dispatches after they became adults. Cheong, however, said Kim Jong Il had Kim Jong Un in mind as his heir when his son was 8 years old. Cheong cited his conversations with Kim Jong Un’s aunt and her husband, who defected to the United States.

The fact that the South Korean spy agency said Ju Ae is about 10 years old despite reportedly being born in 2013 could be related to the country’s age-calculating system that typically makes people’s ages one or two years older.