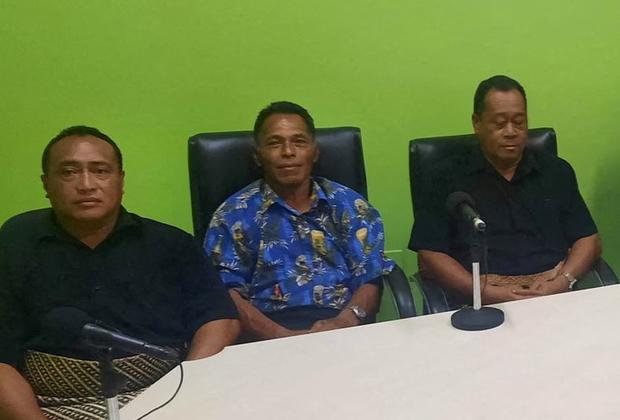 Aid finally started to arrive Thursday in Tonga, five days after a massive underwater volcano smothered the Pacific island nation in ash and sent destructive tsunami waves crashing onto its shores. But as the first planes carrying emergency supplies touched down on the runway at Fua’amotu International Airport, recently cleared of ash, the story of one survivor in particular was captivating people around the world.

Lisala Folau, 57, told Tonga’s Broadcom FM radio station that he managed to swim back to safety “after being washed away” by the tsunami on Saturday, struggling through the surf for a day despite his own physical disabilities.

George Lavaka, an editor at the station, posted a full translation of the station’s interview with Folau on his Facebook page.

The scale of the devastation in Tonga, a nation made up of more than 150 islands, caused by the eruption of the undersea Hunga Tonga-Hunga Ha’apai volcano was still becoming clear on Thursday. Pictures and video emerging from the South Pacific nation showed buildings and trees toppled, covered in ash and strewn with debris. At least three people are confirmed to have died.

Waves started slamming into the tiny Tongan island of Atata, where Folau is among the roughly 60 inhabitants, at about 7 p.m. on Saturday. He first climbed trees to escape the tsunami with family members, but they came down when they thought it was safe.

“My elder brother yelled out to us, there was a big wave coming in. I just turned and looked at the wave — it was a bigger wave than the six-meter [wave] that destroyed our house. When the wave broke on land just below us, my niece Elisiva and I had nothing to hold onto, and we were swept out to sea.”

“We floated at sea, just calling out to each other. It was dark and we could not see each other. Very soon I could not her my niece calling any more, but I could hear my son calling,” Folau said.

When he heard his son calling out to him, he didn’t reply, hoping to protect him.

“The truth is no son can abandon his father,” Folau told Broadcom FM, according to the transcript. “For me, as a father, I kept my silence, for if I answered him, he would have jumped in and tried to rescue me.”

For hours Folau floated, eventually washing up on another one of Tonga’s small islands. At about 10 a.m. on Sunday, he said he decided to swim for the island of Polo’a, closer to the main island.

“I finally got there at 6 p.m. I called and yelled for help but there was no one there,” so Folau once again took to the sea.

“Bear in mind that I am disabled. I can’t walk properly … and when I can, I believe a baby can walk faster,” he told the station of his physical disability.

Finally at about 10 p.m. on Sunday, some 27 hours after he was first swept out to sea, Folau said he made it to the main island of Tongatapu and flagged down a car for help.

Officials have said that Folau’s home island of Atata, about five miles northwest of the main island, was virtually flattened by the tsunami.

It was not immediately clear whether Folau’s niece and other family members survived the disaster, and CBS News could not independently verify the story he recounted to Broadcom FM. The Reuters news agency said his story had gone viral among Tongans online, with one Facebook user dubbing the survivor a “real life Aquaman.”

Folau told the radio station that it was “so unexpected that I survived after being washed away, floating and surviving the dangers I just faced.” He offered his “sincere thanks” to the people from his island, “as well as the country as a whole — I know you prayed for me during the hardships I came through.”