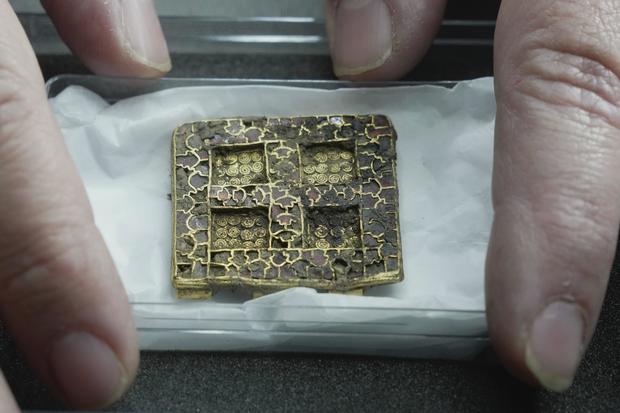 A 1,300-year-old gold and gemstone necklace found on the site of a new housing development marks the grave of a powerful woman who may have been an early Christian religious leader in Britain, archaeologists said Tuesday.

Experts say the necklace, uncovered with other items near Northampton in central England, is part of the most significant early medieval burial of a woman ever found in the U.K.

The woman is long gone – some tooth enamel is all that remains. But scientists say her long-buried trove will shed new light on life in 7th century England, a time when Christianity was battling with paganism for people’s allegiance.

The items are “a definite statement of wealth as well as Christian faith,” said Lyn Blackmore, a senior finds specialist at the Museum of London Archaeology, which made the discovery.

“She was extremely devout, but was she a princess? Was she a nun? Was she more than a nun – an abbess? … We don’t know,” Blackmore said.

The Harpole Treasure – named for the village where it was found, about 60 miles northwest of London – was unearthed in April by archaeologists working with property developer Vistry Group on a neighborhood of new houses.

On one of the last days of the 10-week dig, site supervisor Levente-Bence Balázs noticed something glinting in the dirt.

“When the first glints of gold started to emerge from the soil we knew this was something significant,” Balázs said, according to the BBC. “However, we didn’t quite realize how special this was going to be.”

It turned out to be a rectangular gold pendant with a cross motif, inlaid with garnets – the centerpiece of a necklace that also contained pendants fashioned from gold Roman coins and ovals of semiprecious stones.

“These artifacts haven’t seen daylight in more than 1,300 years,” Balázs said. “To be the first person to actually see it – it’s just indescribable.”

Researchers say the burial took place between 630 and 670 A.D., the same period as several other graves of high-ranking women that have been found around Britain. Earlier high-status burials were mostly men, and experts say the change could reflect women gaining power and status in England’s new Christian faith.

The Kingdom of Mercia, where the Harpole Treasure was found, converted to Christianity in the 7th century, and the woman buried there was a believer, maybe a faith leader. A large and ornate silver cross was placed on her body in the grave. It is adorned with tiny, astonishingly well-preserved likenesses of human heads with blue glass eyes, who may represent Christ’s apostles. Clay pots from France or Belgium, containing residue of an unknown liquid, were also found.

Within a few decades, as Christianity took hold more widely in England, the practice of burying people with their luxury goods died out.

“Burying people with lots and lots of bling is a pagan notion, but this is obviously heavily vested in Christian iconography, so it’s that period of quite rapid change,” said Simon Mortimer of archaeological consultants RPS, who worked on the project.

The Harpole discoveries will help fill in gaps in knowledge about the era between the departure of Britain’s Roman occupiers in the 5th century and the arrival of Viking raiders almost 400 years later. Experts say it’s one of the most significant Saxon finds since the 7th-century ship burial found in the 1930s at Sutton Hoo, about 100 miles to the east.

A handful of similar necklaces from the same time have previously been found in other regions of England, but none are as ornate as the “Harpole treasure”, experts told the BBC. The closest parallel is the Desborough necklace, which was found in Northamptonshire in 1876, and is now in the British Museum’s collections.

Once archaeologists have finished their work, the plan is for the items to be displayed in a local museum.

Property developers in Britain routinely have to consult archaeologists as part of their planning process, and Mortimer said the practice has yielded some important finds.

“We are now looking at places we would never typically have looked at,” he said, and as a result “we are finding genuinely unexpected things.”

“The scale of the wealth is going to change our view of the early medieval period in that area,” he added. “The course of history has been nudged, ever so slightly, by this find.”