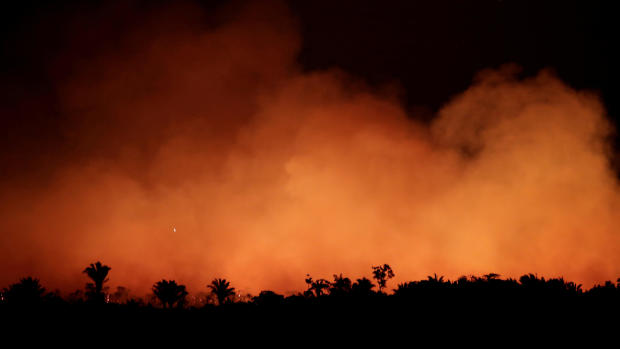 REVERB is a new documentary series from CBS Reports. Watch “Complicit: The Amazon Fires” in the video player above.

On a gray afternoon in early October 2019, weeks after reports about fires raging through the Amazon rainforest dominated global headlines, Sidnei Menezes stood by one of the fields that comprise his nearly 2,700 acre farm. Menezez explained that in an effort to keep his land productive, he had legally set a portion of it ablaze the day before. “This area is being recuperated, it was degraded pasture. So we have authorization for a machine cleaning and a controlled burn,” he said. “It’s a controlled burn, with documents.”

Agricultural exports are a linchpin in Brazil’s economy, with beef and soy being the primary exports. Most of the blazes in 2019 were attributed to both legal and illegal burns used to clear farmland, and the problem is intensifying. In 2019, the number of fires in the Amazon rose over 30% from the previous year, and fires have more than doubled since 2013, according to Brazil’s space research agency, INPE, which documented the deforestation in satellite photos.

Despite INPE’s hard data showing the that fires in 2019 were significantly greater than in recent years, Menezes claimed — without evidence — that their severity was overplayed by the media, and asserted that the media lied. “All this fire didn’t happen,” he said. “The proportion [of attention] given to this news was much more than it was in reality. The burns exist, but they are in specific points. And they are done to clean up areas that are already degraded. The burns don’t happen in the forest.”

Many farmers have made such unsubstantiated claims in an attempt to defend their actions and livelihood as they face attacks for starting the fires. Brazilian journalists have also reported on a misinformation campaign they said was supported by the government of right-wing populist President Jair Bolsonaro. The messages were designed to persuade citizens to reject the INPE’s findings and to dismiss reports of widespread fires as propaganda and foreign meddling, in order to gain popular support for policies to increase deforestation and development.

“The [Bolsonaro government’s] message is that the media is lying,” said Daniel Bramatti, head fact-checker at the Estadão newspaper, headquartered in São Paulo. “That there is an international effort to stop the development of the Amazon and there are too much lands in the hands of few people [and] few indigenous people in the Amazon. That’s the message. ‘We must change that, we must develop the Amazon, we must build more roads, we have to mine the treasures of the Amazon,’ that’s the message.”

Bolsonaro was elected in 2018 under the slogan “Brazil above everything, God above everyone.” His nationalistic agenda promoted policies that prioritize economic development over environmental protections and indigenous rights.

Bramatti says much of the local opinion has been shaped by baseless claims shared on social media in support of the Bolsonaro administration.

Bolsonaro has personally pushed fake news numerous times, notoriously claiming that NGOs (nongovernmental organizations like environmental groups) were to blame for the fires without providing any evidence. He also claimed that accepting foreign aid to fight the fires would threaten Brazil’s sovereignty, “as if we were a colony or a no-man’s-land.” This aversion to foreign interference was amplified by rumors spread online, as Estadão reported at the time.

Bramatti pointed out one article as an example. “This is a rumor about a secret alliance between [French President Emmanuel] Macron and political Brazilian politicians from the opposition to spread disinformation,” he said. “…I mean this is like a conspiracy theory — ‘we have traitors here with us, they are in a secret alliance with foreign leaders to give the Amazon to foreign powers.'”

Another farmer CBS News interviewed in the Amazon repeated these fears, claiming that foreigners only want to exploit Brazil’s natural resources. “They’re a bunch of lowlifes because they don’t care about trees,” he said. “What they care about are the minerals in Brazil. That’s what they want. I’m not indigenous but I’m Brazilian and I have the right to enjoy the land.”

Since the peak of the fires during the summer of 2019, Bolsonaro has maintained his misinformation campaign. In October 2019, he claimed without evidence that the environmental advocacy group Greenpeace caused an oil spill off the Brazilian coast. In early February 2020, after a plea from Pope Francis to protect the Amazon, Bolsonaro again invoked nationalist attitudes and responded: “Pope Francis said yesterday the Amazon is his, the world’s, everyone’s.”

Meanwhile, the deforestation of the Amazon continues to escalate. INPE reported that the loss of forest in January 2020 was double the loss reported for the same month in 2019.