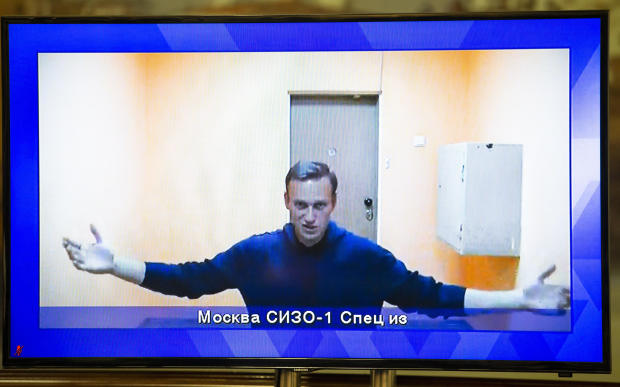 Moscow — A Russian court upheld the 30-day arrest order for opposition leader Alexey Navalny on Thursday. The court denied an appeal for Navalny’s immediate release, ensuring that President Vladimir Putin’s highest-profile critic will remain behind bars as his allies — those who haven’t been taken into custody themselves — plan a new series of mass-protests across the country for this weekend.

Thursday’s hearing followed a wave of police raids at dozens of locations across Moscow that saw many of Navalny’s allies, and his brother, detained.

Navalny, 44, was detained earlier this month at a Moscow airport immediately upon his return from Germany, where he spent the previous five months recovering from poisoning with the deadly Soviet-era nerve agent Novichok . He believes the attack took place in Russia, on Putin’s orders, an allegation the Kremlin has denied.

The opposition politician was placed in pretrial detention on charges of violating the terms of an earlier suspended sentence, stemming from a previous conviction that Navalny has dismissed as politically motivated.

Speaking to the Moscow region court via video link from jail on Thursday, Navalny condemned the criminal proceedings against him as an attempt by the authorities to intimidate him.

“A huge number of people, tens of millions of people agree with me,” he told the court. “We will never allow these people to take over and steal our country.”

He also voiced support for fellow activists who’ve faced persecution since participating in massive, nationwide street protests over his detention last weekend. The court quickly rejected his appeal against the arrest.

The protests in more than 100 Russian cities last Saturday were unsanctioned by Russian authorities, and police responded by taking about 3,500 people into custody.

Navalny’s own arrest after the poisoning ordeal, which left him hospitalized in a serious condition for weeks, has drawn condemnation from senior U.S. and European officials. Secretary of State Antony Blinken said this week that the United States was “deeply concerned” about Navalny’s safety.

“The larger point is that his voice is the voice of many, many, many Russians, and it should be heard, not muzzled,” Blinken said at his first official briefing on Wednesday, adding that the new Biden administration hadn’t ruled out any actions in response.

Navalny’s brother Oleg, as well as his prominent allies Lyubov Sobol and Anastasia Vasilyeva, and Maria Alyokhina, one of the members of the activist Pussy Riot collective, were among those detained Wednesday night in connection with criminal investigations linked to last weekend’s protests.