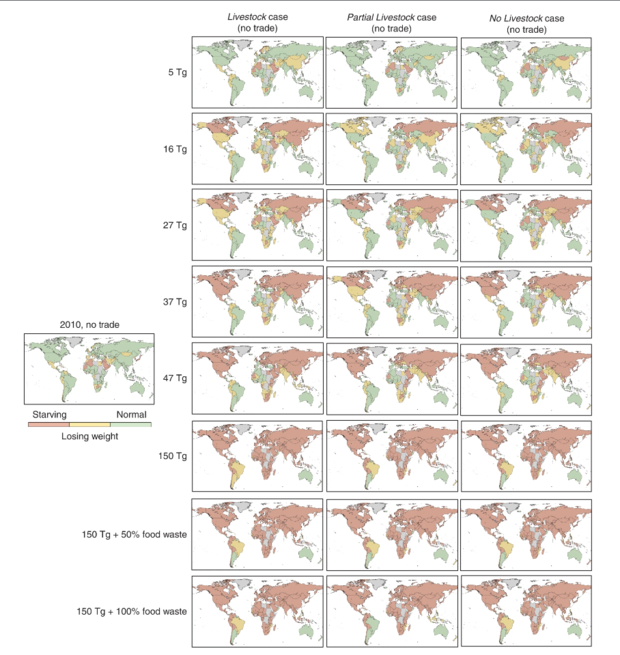 The toll of nuclear war would be instantly catastrophic for those who are within the immediate path of the weapons. But a new study shows just how deadly the scope of such a war would be.

A nuclear blast would cause worldwide famine, according to the study, published in Nature Food on Monday, as massive amounts of soot would block sunlight, disrupt climate systems and limit food production.

“[It] would be a global catastrophe for food security,” the authors said.

Even a relatively small nuclear conflict, such as one between India and Pakistan, would be devastating, researchers found. A week-long nuclear war involving about 100 weapons and the release of 5 Tg, about 11 billion pounds, of soot would kill 27 million people directly. The study said after two years, with international trade at a halt and a 34.7ºF temperature drop, the famine it creates would kill 255 million people, assuming that the rest of the population got the minimum food needed to survive, about 1,999 calories per capita per day.

The largest scenario examined, a week-long war involving 4,400 weapons and 150 Tg, or 330.6 billion pounds, of soot – such as one that would occur between the U.S., its allies and Russia – would kill 360 million people directly – and more than 5 billion from starvation, the study said. The density of the soot would reduce global temperatures by more than 58ºF.

“While amounts of soot injection into the stratosphere from the use of fewer nuclear weapons would have smaller global impacts,” researchers said in their article, “once a nuclear war starts, it may be very difficult to limit escalation.”

Using climate, crop and fishery models, researchers found that the climatic impacts of soot from nuclear war would peak in the first few years but last for about a decade.

In the worst-case scenario, when 150 Tg of soot is unleashed, the global average calorie production from crops would decline by about 90% just three to four years after the nuclear war, the study found.

“The changes would induce a catastrophic disruption of global food markets,” the study says, “as even a 7% global yield decline compared with the control simulation would exceed the largest anomaly ever recorded since the beginning of Food and Agricultural Organization (FAO) observational records in 1961.”

Lead author Lili Xia, a climate scientist at Rutgers University, told Nature that the situation would be “really bad.”

“A large percentage of the people will be starving,” they said.

The findings are the result of looking at a range of scenarios. The scientists considered whether people would continue to farm animals or use any remaining crops to feed people instead. They also assumed that people would repurpose biofuel crops for human consumption, that food waste would be limited and that global food trade would halt as nations tried to save their own.

But not all nations of the world would face the same fate under the scenarios studied. Under the smallest nuclear war situation studied, researchers found that the Middle East, parts of Central America and parts of Asia would see some food deprivation to starving while most of the rest of the world would continue to have a normal food intake.

In the most extreme situation studied, every country aside from Australia, Argentina, Uruguay, Oman, Brazil, Paraguay and few others, would starve.

“The first time I showed my son the map, the first reaction he had is, ‘let’s move to Australia,'” Xia said.

Earlier this year, CBS News conducted a study that found 70% of adults are worried that Russia’s invasion of Ukraine could trigger nuclear conflict. Those findings emerged after Russia’s foreign minister said the risk of nuclear conflict “should not be underestimated.”

That fear has only been stoked throughout the year. In July, Iran said it has the technical capacity to build a nuclear weapon, though it said it hasn’t yet done so, and North Korean leader Kim Jong Un said he would use nuclear weapons in potential military conflicts with the U.S. and South Korea.

Nuclear weapons haven’t been used in a conflict since 1945, but currently, the U.S. and Russia have more than 1,500 nuclear weapons deployed and ready to fire.

Alex Wellerstein, historian and professor at the Stevens Institute of Technology, said that it’s not in the interests of U.S. enemies to get involved with such actions.

But, he said, it should still be a concern.

“Future problems are brewing,” he said. “I guarantee it.”