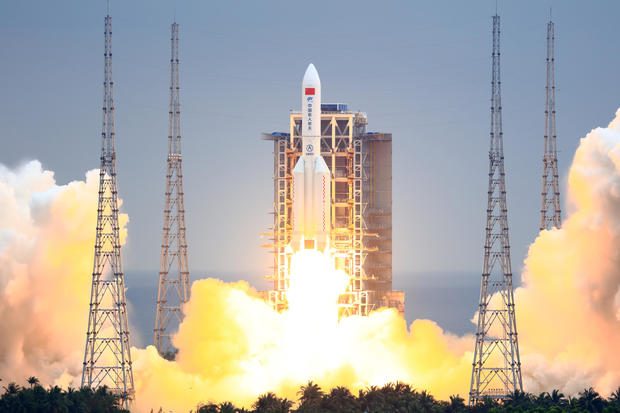 A huge piece of space junk is about to make an uncontrolled re-entry back into Earth’s atmosphere, threatening to drop debris on a number of cities around the world this weekend. It’s leftover from China’s first module for its new Tianhe space station — and no one knows exactly where it will land.

The 23-ton Chinese rocket Long March-5B recently launched the first module for the country’s new space station into orbit. After the core separated from the rest of the rocket, it should have followed a predetermined flight path into the ocean.

But now, scientists have little idea where it will land as it orbits the planet unpredictably every 90 minutes, at about 17,000 miles per hour. As it soars through the atmosphere, appearing to tumble, it is slowly losing altitude.

Its fast speed makes its landing place nearly impossible to predict, but it is expected to make landfall late Saturday. Because it was specifically designed to withstand high temperatures, parts of it will probably survive re-entry.

U.S. Space Force officials currently estimate the rocket will make landfall between about 9 p.m. and 11 p.m. ET. The Aerospace Corporation has made a similar prediction.

“U.S. Space Command is aware of and tracking the location of the Chinese Long March 5B in space, but its exact entry point into the Earth’s atmosphere cannot be pinpointed until within hours of its reentry,” Lt. Col. Angela Webb, U.S. Space Command Public Affairs, told CBS News earlier this week.

The 18th Space Control Squadron is offering daily updates on the rocket body’s location. Several other agencies are also tracking its movement.

On Thursday, a defense official told CBS News that the rocket is now “projected to fall to Earth on Sunday, but where is still unknown.” Defense Secretary Lloyd Austin said there are no plans to try to shoot down the rocket, which would only create more debris.

White House Press Secretary Jen Psaki said that “the U.S. is committed to addressing the risks of growing congestion due to space debris and growing activity in space, and we want to work with the international community to promote leadership and responsible space behaviors.”

Despite much speculation, no one knows what will happen when the rocket enters Earth’s atmosphere, or where the debris will fall. It has the potential to land in the U.S., Mexico, Central America, South America, Africa, India, China or Australia.

Most likely, it will land in the ocean, which makes up over 70% of the planet, or in an uninhabited region. However, as one of the largest spacecraft to ever re-enter uncontrollably, there is still a risk that debris will land in a metropolitan area.

But, again, the odds are low.

According to CBS News’ William Harwood, “a large portion of the rocket will burn up in the atmosphere and the odds of anyone or any specific community getting hit by surviving debris are remote.”

But, this didn’t need to happen.

“Why the Chinese rocket is coming down uncontrolled is not at all clear,” Harwood said. “U.S. rockets (and most others) routinely fire their engines to target re-entries over the southern Pacific to ensure debris can’t land on populated areas.”

Psaki said that it is “in the shared interests of all nations to act responsibly in space to ensure the safety, stability, security, and long-term sustainability of outer space activity.”

The China National Space Administration has faced issues with re-entry in the past. In 2018, Tiangong 1 , China’s defunct space station, made an uncontrolled re-entry and landed somewhere in the Pacific Ocean. In May of last year, another Long March-5B rocket fell into the atmosphere, ultimately landing near the west coast of Africa.

The most significant re-entry breakup over a populated area was the shuttle Columbia, which entered in February 2003. When 200,000 pounds of spacecraft broke up over Texas, a significant amount of debris hit the ground, but there were no injuries.

Similarly, when Skylab re-entered in 1978, debris fell over Western Australia, but no injuries were reported.

William Harwood contributed to this report.