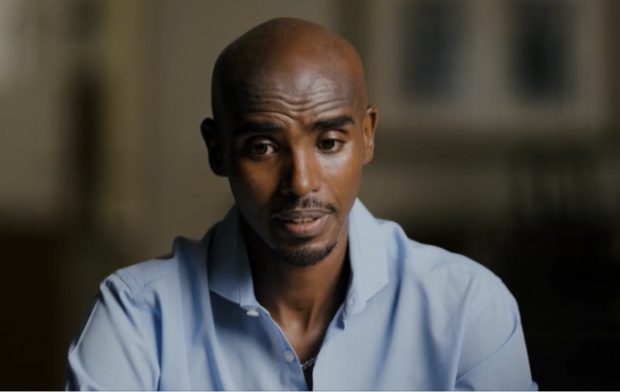 London — British Olympic track star Mo Farah has told the BBC that he was trafficked from the east African nation of Djibouti to the U.K. when he was nine years old and forced to work as a domestic servant for a family in London. In a documentary set to air Wednesday, Farah says his real name is Hussein Abdi Kahin.

“Most people know me as Mo Farah, but it’s not my name, or it’s not the reality,” the track star says in a clip released by the BBC. “I was brought into the U.K. illegally under the name of another child called Mohamed Farah.”

Previously, Farah had said he came to the U.K. as a refugee from Somalia with both of his parents. But in clips released from the BBC documentary, he reveals that his father was killed in a civil war when he was four, and his mother and brothers still live in Somaliland and have never been to Britain.

Farah tells the BBC that when he was eight or nine, he was taken to Djibouti to stay with family members. From there he was taken to the U.K. by a woman he had never met, who told him he was going to stay with relatives in Britain. He says she provided him with false travel documents and told him to say his name was Mohamed Farah.

“I know I’ve taken someone else’s place… and I do wonder, what is Mohamed doing now?” recalled the track star.

When they arrived in London, the woman took Farah to her apartment and threw away a piece of paper that had his relatives’ address on it, the BBC reports.

Farah says he was forced to do domestic labor in exchange for food and would often lock himself in a bathroom to cry.

“If I wanted food in my mouth, my job was to look after those kids. Shower them, cook for them, clean for them,” he says. “And she said: ‘If you ever want to see your family again, don’t say anything. If you say anything, they will take you away.'”

After a few years the woman allowed Farah to go to school. She told the school he was a refugee from Somalia. The young man arrived at school appearing uncared for and speaking little English, the BBC reports.

“The only language he seemed to understand was the language of PE and sport,” Farah’s former PE teacher, Alan Watkinson, tells the BBC.

Eventually Farah told Watkinson about his situation and the teacher alerted social services. Farah was then fostered by another Somali family.

“I still missed my real family, but from that moment everything got better,” Farah tells the BBC. “I felt like a lot of stuff was lifted off my shoulders, and I felt like me. That’s when Mo came out — the real Mo.”

When Farrah was invited to take part in a running competition in Latvia, he told his PE teacher he didn’t have any travel documents. Watkinson helped him apply for British citizenship under the name Mohamed Farah, and he got it in 2000.

In the documentary a lawyer tells Farah that, technically, his citizenship was “obtained by fraud or misrepresentations,” which means it could be revoked by the British government, but that the chances of that happening are low because he was a victim of trafficking.

Britain’s Home Office issued a statement saying that “no action whatsoever will be taken against Sir Mo and to suggest otherwise is wrong.”

Farah says he wanted to share his story to change perceptions around slavery and trafficking, the BBC reports.

“I had no idea there was so many people who are going through exactly the same thing that I did. It just shows how lucky I was,” he tells the BBC. “What really saved me, what made me different, was that I could run.”

Farah won four gold medals in distance running at the 2012 and 2016 Olympic Games. He was knighted in 2017 by Queen Elizabeth II. He went on to win the Chicago Marathon in 2018, and recently announced that he will be running in the London Marathon in October.