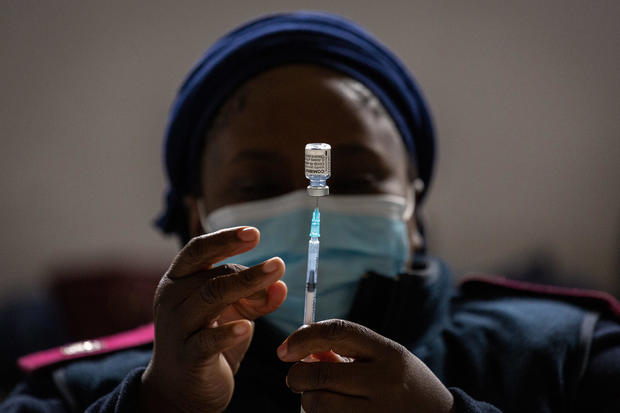 Johannesburg — South African scientists have released early data showing the Omicron variant of the coronavirus has a “robust ability” to evade the immunity offered by inoculation. But, as CBS News foreign correspondent Debora Patta reports, it’s not all bad news.

Pfizer and BioNTech said on Wednesday that while the standard two-dose regimen of their vaccine was “significantly less effective at blocking the virus,” a booster shot “neutralized the Omicron variant in lab tests.”

The pharmaceutical companies released a statement reporting their latest data as both they and independent researchers race to understand how much of a threat Omicron poses to the world. The news from Pfizer and BioNTech echoed what scientists in South Africa have reported — including that the standard two-dose inoculation “may still induce protection against severe disease.”

Alex Sigal, the researcher behind the latest data from South African trials, said what his team had found was “better than I expected,” showing that Omicron still relies on the same biological mechanism to attack human cells that previous variants have used. That means the current vaccines — which prompt the body to deploy two weapons against COVID-19 that work in different ways, T-cells and antibodies — will still have some effect.

Sigal said in a series of tweets announcing his team’s preliminary data, which has not yet been peer reviewed, that while there was “a very large drop in neutralization of Omicron” seen with the Pfizer/BioNTech vaccine, the highly-mutated strain’s “escape” from the vaccine’s protection was “incomplete,” which he said “means its a tractable problem with the tools we got (sic).”

In other words, while the vaccines alone appear to offer significantly less protection against catching the new variant, they’ll still help. Crucially, the vaccines are expected to continue keeping people out of hospitals, even with Omicron, and there’s also information suggesting the new strain may land fewer people in ICUs than previous variants to begin with.

Dr. Mike Ryan, the World Health Organization’s emergencies director, stressed on Wednesday that there was no indication yet that the vaccines would prove less effective at preventing serious illness with Omicron than with previous variants.

“We have highly effective vaccines that have proved effective against all the variants so far, in terms of severe disease and hospitalization,” he told the French news agency AFP. “And there’s no reason to expect that it wouldn’t be so” for Omicron.

Ryan also pointed to early, real-world information coming from South Africa, which suggests that while Omicron is extremely contagious, it does not appear to make people any sicker than Delta or other strains: “If anything, the direction is towards less severity.”

As South Africa heads toward the peak of its fourth wave, one of the country’s leading vaccinologists told Patta that the world doesn’t need to wait for lab results to determine whether Omicron is more deadly, as there’s already data from hospitals, and it’s better news than predicted.

South African health officials are racing to vaccinate people as Omicron spreads fast across the country, but Patta says there has been one notable difference with this wave: It has not been accompanied by the high number of hospitalizations and deaths associated with previous surges in infections from other variants.

When Patta and her team visited a hospital COVID ward six months ago during the country’s deadly third wave, fueled by the Delta variant, it was overwhelmed. ICU beds and oxygen were in desperately short supply.

Today, despite the huge spike in new infections from Omicron, the same hospital is unrecognizable. Their COVID wards are half empty — and the science is backing up the powerful anecdotal evidence.

While the study carried out by Sigal’s team shows the Pfizer shot may be 40 times less effective at preventing Omicron infections, the cases confirmed so far in South Africa have been far milder than those seen during previous waves, according to vaccinologist Professor Shabir Madhi.

“What that tells us is that we’re building up some level of immunity, even against Omicron, which is adequate to prevent the progression from infection to severe disease and death,” said Madhi, a senior researcher who has led many of South Africa’s COVID-19 trials.

What appears to be helping so much is “T-cell immunity.” Unlike antibodies that can prevent a virus from bonding to human cells in the first place, the body’s T-cells, induced by both vaccines and past infections, attack infected cells to prevent the disease from becoming severe.

Madhi said that in Johannesburg, where infections have been surging, over 70% of the population have developed antibodies against COVID-19, and not just from the vaccines.

Vaccination rates remain low in South Africa, but so many people have been previously infected with COVID that there are high levels of natural immunity in the population. Getting there has come at a cost, however. Nearly 90,000 lives have been lost to the disease according to official tallies, but many experts say the real toll is probably closer to 270,000.

Scientists stress that while the current vaccines may not be nearly as effective at preventing infections with the Omicron variant, they are still crucial.

“When people choose not to be vaccinated, they’re more likely to end up in hospital and die of COVID-19,” said Madhi.

South Africa now has enough vaccines for the country, but uptake has slowed down in recent weeks due to apathy and vaccine hesitancy.

Nurse Ivy Kaunda spends her days going out into communities to convince reluctant residents to get a jab.

Every single person she convinces is a success, and every success counts on this battlefront as it’s one more person armed against COVID-19 with the most powerful weapons we have available.

The South African government is considering making vaccines mandatory as it ramps up the fight against the new variant.