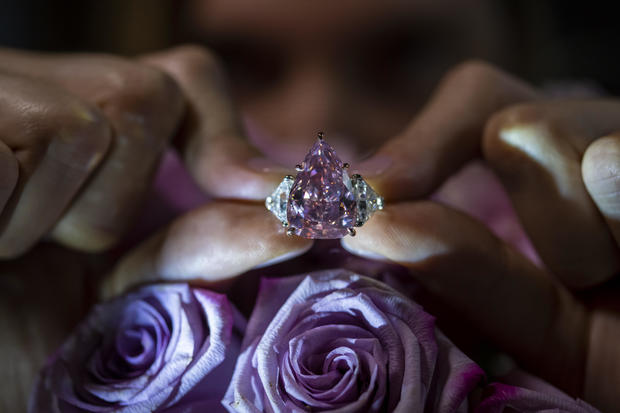 The “Fortune Pink” diamond, an exceptionally rare giant gemstone, sold for more than $28.5 million at auction in Geneva on Tuesday to a private Asian collector.

At 18.18 carats, the gem is the largest pear-shaped “fancy vivid pink” diamond ever sold at auction, Christie’s auction house said.

The bidding, which lasted for a tense four minutes, started at 17 million Swiss francs and was a three-way battle between telephone bidders, with the winner eventually claiming the gem by upping the bid by half a million.

The diamond was exhibited in Geneva then headed to New York, Shanghai, Taiwan and Singapore in October before returning to Switzerland.

It was auctioned in the Magnificent Jewels sale at the Hotel des Bergues, part of Christie’s Luxury Week of sales in Geneva.

The Fortune Pink had been estimated to fetch between $25 million and $35 million.

Max Fawcett, head of Christie’s jewelry department in Geneva, said the stone with a strong, saturated pink color was mined in Brazil more than 15 years ago. He declined to identify its owner, but described the diamond as “a true miracle of nature.”

“We’ve had a huge amount of interest in the stone from all over the world,” Fawcett said in an interview. “It’s a truly incredible diamond.”

The auction comes six months after Christie’s sold “The Rock” — a 228-carat egg-sized white diamond billed as the largest of its kind to go up for auction — for more than $21.75 million, including fees. That was at the low end of the expected range.

The world record for a pink diamond was set in 2017, when a stone known as the CTF Pink Star was sold in Hong Kong for $71.2 million.

In July, miners in Angola unearthed a rare pure pink diamond that is believed to be the largest found in 300 years, according to the Australian site operator. The 170-carat pink diamond — dubbed The Lulo Rose — was discovered at Lulo mine in the country’s diamond-rich northeast and is among the largest pink diamonds ever found.