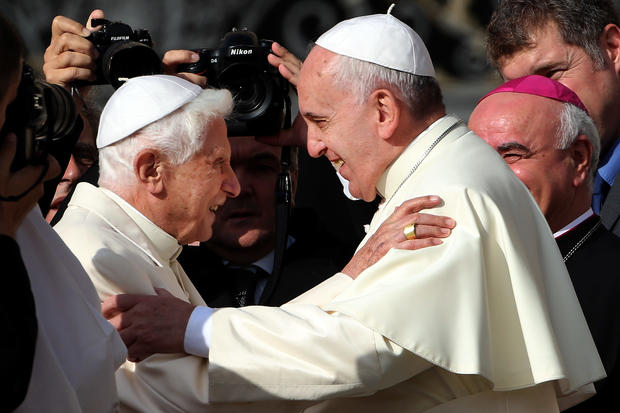 Rome — Both Pope Francis and retired Pope Benedict have had their first doses of a coronavirus vaccine, the Vatican confirmed on Thursday. The pontiff and his predecessor got the first half of their vaccinations as part of a campaign for Vatican City residents and employees launched on Wednesday.

Pope Francis is 84, and Pope Emeritus Benedict is 93, so their ages alone put them both at high risk for complications from the virus. Additionally, at age 21, Francis had part of a lung removed due to a recurring lung infection. He spent months in a hospital, unsure whether he would live or die.

“I have some sense of how people with coronavirus feel as they struggle to breathe on ventilators,” he wrote recently , recalling his health crisis more than half a century ago.

Francis has been a staunch advocate of COVID-19 vaccinations, even calling the refusal of inoculation ethically unacceptable.

“You are gambling with your health, with your life, but you are also gambling with the lives of others,” he said in a recent interview with Italian broadcaster Canale 5. He said “anti-vaxxers” were living in inexplicable “suicidal denial.”

The Vatican’s doctrinal office in December said it was “morally acceptable” for Catholics to have a coronavirus vaccine, even if was developed using cell lines from aborted fetuses .

The United States Conference of Catholic Bishops, however, said that while all three of the major vaccines — by Pfizer, Moderna and Oxford/AstraZeneca — had a “very remote” connection to stem cells from aborted fetuses, the AstraZeneca vaccine was “more morally compromised,” and thus “should be avoided if there are alternatives available.”

It’s believed that Pope Francis and Pope Emeritus Benedict both received the Pfizer vaccine. In December, the head of the Vatican’s health service said the tiny city state would roll out its vaccination program with the Pfizer medication.

Francis has been a strong advocate for a just and equitable distribution of COVID-19 vaccines throughout the world, especially to those most in need.

Vatican City has had fewer than 30 cases of COVID-19, including some in the same hotel residence where Pope Francis lives. The majority of cases, however, have been among Swiss Guard members, who live in communal barracks.