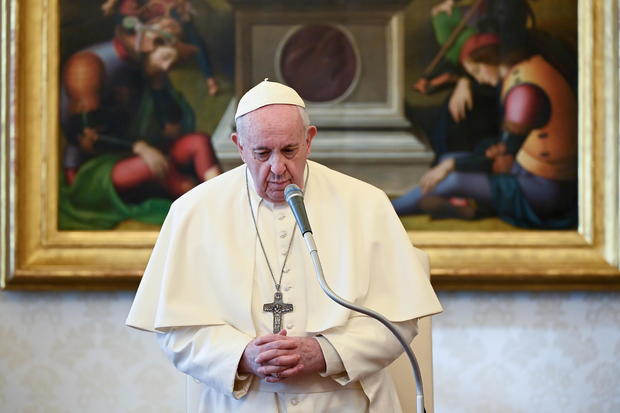 Pope Francis marked Holocaust Remembrance Day on Wednesday by warning that warped ideologies can pave the way to another genocide. Francis spoke off the cuff at the end of his weekly general audience, held in his private library because of coronavirus restrictions, to commemorate the 76th anniversary of the liberation of the Auschwitz death camp  in Poland, where Nazis killed more than 1 million Jews and others.

In all, about 6 million European Jews and millions of other people were killed by the Germans and their collaborators.

The Argentine pope insisted on the need to remember, saying it was a sign of humanity and a condition for a peaceful future. But he said remembering “also means to be aware that these things can happen again, starting with ideological proposals that claim to save a people and end up destroying a people and humanity.”

He warned that the Holocaust began that way, opening “this path of death, extermination and brutality.”

Francis prayed at the Auschwitz-Birkenau memorial during his 2016 visit to Poland.

A Jewish prayer for the souls of people murdered in the Holocaust echoed Wednesday over where the Warsaw ghetto stood during World War II as a world paused by the coronavirus pandemic observed the 76th anniversary of the liberation of Auschwitz.

Most International Holocaust Remembrance Day commemorations were being held online this year due to the virus, including the annual ceremony at the site of the former Auschwitz death camp. The memorial site is closed to visitors because of the pandemic.

In one of the few live events, mourners gathered in Poland’s capital to pay their respects at a memorial in the former Warsaw ghetto, the largest of all the ghettos where European Jews were held in cruel and deadly conditions before being sent to die in mass extermination camps.