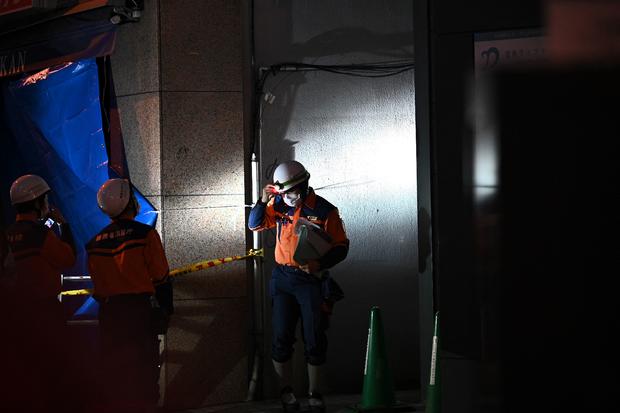 Tokyo — Japanese police were investigating a fire that swept through a clinic on Friday, killing 19 people, as possible arson. At least eight more people were injured by the blaze that tore through the clinic in the western city of Osaka. If confirmed as arson, it would be one of the worst such attacks in Japan in years.

Scores of firefighters and rescue workers converged on the busy street soon after the fire broke out in an eight-story building. The fire originated on the fourth floor, in a psychiatric clinic, just after it opened for business.

It took fire crews about 30 minutes to quash the flames, but multiple victims were left trapped in the smoke-filled clinic.

Witnesses said a man in his 60s was seen carrying a paper bag that leaked liquid and then ignited. It wasn’t immediately clear whether the potential suspect was among the victims, or if he fled the scene.

One expert told local media outlets the incident was “shocking,” but that the number of deaths was not completely unexpected: Japanese cities are packed with similar mixed-use buildings that often rely dangerously on a single escape route.

The clinic specialized in the treatment of depression for people returning to work. It was believed to be crowded with patients and counselors at the time of the fire.

If confirmed as arson, it would be the worst such attack in Japan since a film animation studio was set ablaze in 2019 , killing more than 30 people.