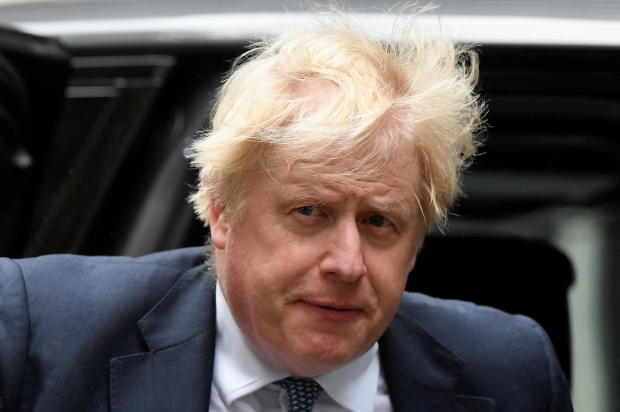 London — One person got sick after drinking too much. A “minor altercation” broke out between two others. Red wine spilled on a wall and across boxes of photocopy paper after “excessive alcohol consumption” at an hours-long party.

Those were among the details in a long-awaited report released Wednesday by the senior British civil servant who was tasked with investigating parties attended by top government officials during the U.K.’s strict COVID-19 lockdowns.

In April, Johnson was  for attending his birthday party, making him the first British prime minister ever found to have broken the law while in office.

“What took place at many of these gatherings and the way in which they developed was not in line with COVID guidance at the time,” Gray said.

The report included 10 redacted photographs, including four that show Johnson himself attending a birthday party in his honor in June 2020, and four others that show him raising a glass at another event. Both events were held at his Downing Street office.

Allegations that Johnson and his staff enjoyed illegal parties in 2020 and 2021 first surfaced last year, angering people across the country who were prohibited from seeing friends and family — even for funerals — under the COVID-19 restrictions that Johnson’s government had imposed.

Gray said there were “failures of leadership and judgment” and the standards of behavior “fell well short” of the public’s expectations.

She noted that recommending any disciplinary action fell outside the scope of her report, and she even credited Downing Street for starting to address an office culture in which some staff felt they could not raise their concerns about certain behaviors at work.

The scandal, dubbed “Partygate,” has sparked myriad calls for Johnson to resign, but shortly after the release of the report on Wednesday, the prime minister stood before British lawmakers and issued another refusal to step down.

“I am humbled, and I have learned a lesson,” he told the House of Commons during the weekly television spectacle of “Prime Minister’s Questions.”

He insisted again that he had not knowingly broken any rules and urged his fellow lawmakers and the public to simply move on.

“The best thing now for our country is to move forward together,” the prime minister said.

But critics say Johnson and members of his cabinet knowingly misled parliament.

“They think it is everyone else’s fault but theirs,” said opposition leader Kier Starmer of the Labour Party. “The truth is they set the bar for [Johnson’s] conduct lower than a snake’s belly.”

“Why wasn’t I by the bedside of my grandmother during her final few days? Why did I let her die alone in that hospital?” asked Labour Parliamentarian Tanmanjeet Singh Dhesi. “Because of worries about government restrictions.”

Some British political analysts and opposition lawmakers say Johnson has managed to cling to power through Partygate partly because Russia’s invasion of Ukraine and rising inflation have helped divert the public’s attention.

If there is such a vote and Johnson were to lose it, he would be replaced as prime minister through an internal election within the Conservative party, and that would make a national election to contest the Conservatives’ leadership position highly likely.